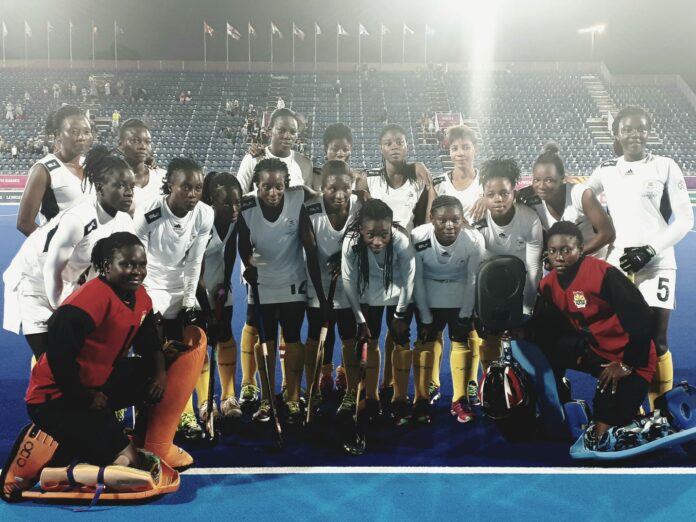 Ghana women were dealt Trans-Tasman baptism of fire to mark global tournament debut, but have hearts to match

“We are here to give the people of Ghana hope and to leave a great mark on the world,” women’s captain Nafisatu Umaru declared before their Commonwealth adventure began on Friday.

And even after a 12-0 drubbing by New Zealand there remained hope. Yes, short in stature against the muscled shoulders of the Kiwis, but big in heart. The African media outlet which called the result “humiliating” clearly weren’t present.

“I’m proud to play with this team,” Elizabeth Opoku then revealed after their debut on the global stage. “The quickness and movement and the skill level was far ahead of us. They played a continual game.

“We don’t give up easily. We play to our game and we still have to fight.”

Indeed, they never once did drop their shoulders and by the 30-minute mark, the crowd was willing any drive into the D to finish in a goal. At the hooter, they deservedly took in applause with a mini lap of honour.

Their inclusion could be construed as a misfit for world hockey. Yet, there is context here as the game attempts to expand.

Four years ago, England Hockey, the FIH and UK Sport clubbed together to set up the Targeted Assistance Programme in West Africa.

One of the edicts was to get Ghana women to a world level event by 2022. This weekend they faced New Zealand, then Australia – a very respectable 5-0 defeat – a baptism of fire four years ahead of schedule.

They are ranked No.2 in Africa (behind South Africa) but, says coach Richard Attipoe “in the world we are chasing”.

The world No.30 national team is made up of Ghana’s two top club sides, while most of the girls were spotted at school, where they play on grass.

There is now one water-based pitch in Accra, while a programme will be implemented across three regions in Ghana where there will be a talent ID programme.

Who knows, in the future rival teams may hear melodic Ghanaian notes being sung from the opposite dressing room.

Understandably, nerves were present ahead of the Black Sticks meeting. “They do sing from time to time, but today they did not. They were too focused,” mused Attipoe.

And in the Land of Gold, prospects are good that there might be a nickname too. “Well, no, not yet. We were playing the Black Sticks so maybe we can be the Golden Sticks!”