Georgie Twigg last stepped inside Bisham Abbey two years ago as Great Britain women were putting the final touches to their soon-to-be golden sojourn in Rio.

And although the Surbiton midfielder admits that the mere thought of returning for the training rigours under coach Danny Kerry has not been top of her agenda, retaining her fitness has been key to the next phase of her career.

She has married the two well; like the time she went on secondment for three months at the Football Association at Wembley as part of her legal training at Bird & Bird.

She says: “Everyone was very active, I was the only girl, we used to run up the steps of Wembley during lunch which was an absolute killer.

“We would also go to the top level of Wembley’s seats. It’s like an open track up there and you can run round doing laps.”

Down below sat an empty field and perhaps dreams of renewing battles in big tournaments. That will be the case this week when her club hosts the EuroHockey Club Cup at Sugden Road from Thursday and where the English champions are hoping to do better than fourth in their three previous campaigns.

She is also currently going through the final throes of qualifying as a solicitor and is hoping to be retained in commercial sport next month. Despite her busy life, Twigg, who hasn’t officially retired as an international, admits that since leaving the GB programme following Rio, she has been able to focus on and enjoy club life for the first time.

“I’ve loved sport generally so I’ve found it strange that people would retire and that’s it for them,” she tells The Hockey Paper.

“I’ve really enjoyed playing for Surbiton the last few years more than I have done previously, not being exhausted when I’ve turned up after a long week and now I’ve been able to get really stuck in.

“On the international scene you are away a lot and you can’t fully invest in the club with training once a week. Now, it’s great to get out there when I’ve been sat at my desk all day.” 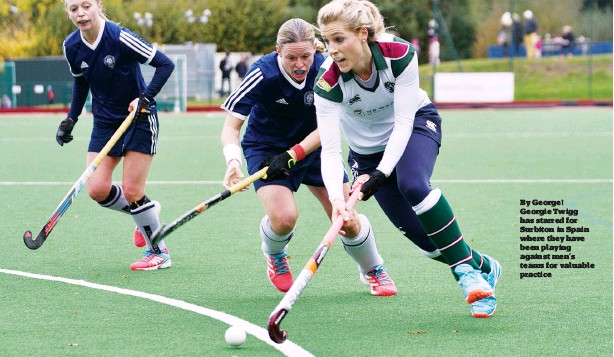 Under the helm of Brett Garrard, Surbiton have thrived. As we reveal this week, the club have only lost 18 league games in the nine years since he joined as head coach.

“He’s been through it all himself as a top class player. He brings the angle of managing players in the international set up, young players coming through and he strikes a really good balance of professionalism and a relaxed, enjoyable atmosphere.

“The likes of myself, Pagey (Sarah Page) and Herbie (Beckie Middleton), we’ve been at the club for six years and it is remarkable that so many players stay on. It is that environment which has ultimately been created by Brett.

“He is great with his tactics but it is how he manages the squad which can’t be easy when you’ve got so many internationals, players doing GCSEs, managing that alongside the professionalism that we want to be delivering as well.

“He is definitely doing something right!”

While Twigg, who is still only 27, continues to experience silverware at Surbiton, she knows that she is in “the next phase of my life” despite still being classed as an international.

“I don’t really miss it but when the girls were away at the Commonwealths you can’t help but think about it, that it would have been amazing to be a part of, as I loved playing tournaments. I’m on a different challenge now. I’m loving the club side.”

But if she was asked to make a return like Crista Cullen was in the lead-up to Rio? “It’s a difficult one as the girls are training day in, day out and it would only be if it was right for me and right for them.

“Personally I think I’m done but it’s perhaps one of the reasons why I haven’t retired as I’m still playing club hockey at a high level so it’s hard to say I’m offially retired.

“I think I am done on the international side and enjoying work, but it’s hard to put that final cut off to it.”

Not when Surbiton seem to be edging closer against Europe’s elite.

“We are all excited and hoping that we will be lifted by that extra percent in front of a home crowd,” adds Twigg.

“The first game is a crunch game which we have struggled with in the last couple of years. But we’re looking strong as a team and hoping it will all come together.”

Georgie Twigg is an ambassador for Toropro, creators of a high quality Kinesiology Tape for joints and muscles