Next year, Brett Garrard will mark 10 years at the helm of – and let’s not hold back here – one of the biggest success stories in British sport at club level.

One season in South Clubs’ Women’s League, two seasons in the Conference East and six in the Premier Division. In that time, Surbiton Ladies have played 162 league matches and lost 18. Since their entree to the top flight they have been defeated just 12 times, seven of those coming in the first two seasons.

They also enjoyed a 53-game unbeaten run from 2014 to 2017 when they leaked 22 goals, scored over 100 and were dubbed ‘The Invincibles’. This season, the double was secured once more.

“Whenever I reflect on it, I never talk about results. Clearly it’s a huge part of the game but I quite deliberately don’t talk about it,” says a forward-thinking Garrard, a GB Olympian and former Surbiton player. “But I would be interested to see how many players I have used in that time. It would be a considerable number.”

A large part of Surbiton’s success has certainly been the club’s junior programme, which has seen a plethora of young talent play from an early age and make hay in the first team. During the ‘Invincibles’ run for example, Garrard used 43 players over the 53 games.

“That is one of the things I have been most pleased with, that we’ve been able to take a lot of players on a long journey with us and hopefully they have developed as individuals and as a whole team.”

It would take a good dose of the players Garrard has used over that time to sheen the Sugden Road trophy cabinet.

There is one space the club would love to fill, however. After three seasons in the European Cup, the time has come for the five-time national champions to also make hay on the continent.

The 41-year-old adds: “The Euros will be a huge test as to how far we have come as a group, bearing in mind the importance we put on this single one game in the current format and to see how we can cope with Europe’s best.

Garrard’s side has finished fifth, sixth and fourth at the EuroHockey Club Cup, yet they always seem to be hampered in preparation.

Take last year’s tournament when they were put to the sword by Maartje Paumen’s stick in the second-half during a 7-1 defeat to ‘s-Hertogenbosch (Den Bosch), the EuroHockey favourites this week.

“We are within touching distance,” believes Garrard. “We played Den Bosch without four of our starting players through injury or unavailability. We competed for a half and the big things for us was to make the semi-finals. But our preparation was as tough as can be. Not having a competitive game for seven weeks is always tough for an English team going into Europe.”

“It’s a huge honour and privilige playing at the tournament and I never think we do ourselves justice.”

Multiple European title exponents Den Bosch are a team who train five times a week and, 12 months on, the landscape hasn’t changed. The Dutch team will travel to London with competitive hockey still pumping in their veins, while Surbiton’s campaign finished two weeks ago.

“Their preparation has been perfect for this tournament. It’s very different everywhere else compared to what we have here,” says Garrard, “but having it at the club adds to the excitement and pressure.

“I’m happy where we are but mindful of the fact of how little I see my internationals compared to what Den Bosch have. I’m positive of how we can perform in this tournament, bearing in mind the experiences we’ve had in the years gone by. I’m also mindful of this is where we’re at and we will do our best with the opportunities we’ve had.”

That will be reflected at some point this weekend through the selection of 15-year-old Ella Burnley, an England under-16 player who will sit GCSEs on Thursday and Monday, with coaching staff hopeful of giving her an introduction to continental hockey.

“She has been excellent for us and worth her place at this stage of the season,” adds Garrard. 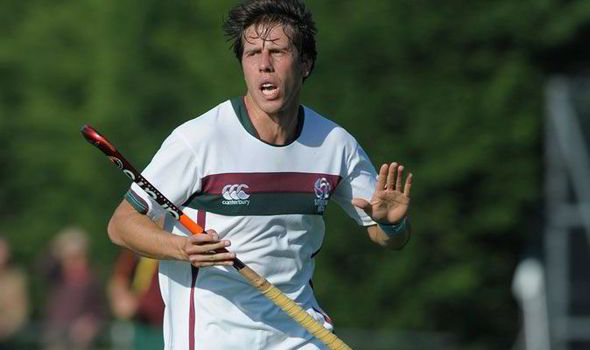 Burnley will join seasoned campaigners like Beckie Middleton, Georgie Twigg, Sarah Page, Giselle Ansley and Hollie Pearne-Webb, while Garrard will be sweating on the fitness of captain Sarah Haycroft and Emily Defroand.

All star players in England’s most successful club team, fighting against the odds in Europe.

Garrard says: “It was always my aim when I joined to get the Ladies to the same stage as the men, in the European Cups and winning medals. And the results in between all that has led us to this point.”

Surbiton have finished top or won the league via the playoffs (or both) in 10 out of the last 14 seasons:

Surbiton finished 10th out of 11 teams in SCWHL Division 2 in 2003-04 and were relegated to the Surrey League and when they won promotion, the SCWHL expanded to three divisions, meaning Surbiton had to work their way up an extra division to get to the IWHL.

Surbiton have never lost by more than two goals in domestic hockey since Brett Garrard started coaching in 2009-10.