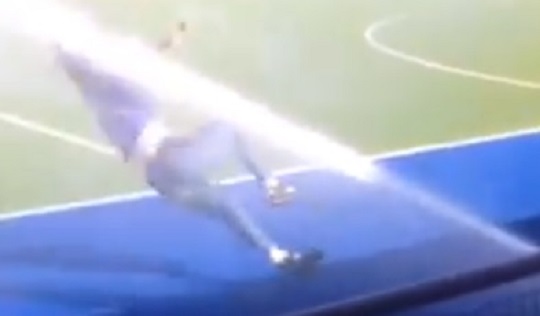 A University of Bath student got more than she bargained for when she attempted to gatecrash the annual Varsity hockey match against Cardiff Met – as the hottest day of the year won the day in hilarious fashion on Wednesday.

For hockey players who play on water-based pitches, it is safe to assume that most know the perils of getting too close to the powerful sprinkler systems.

For this Bath student – with beer costing a tempting £2.60 for the Varsity shenanigans – the dangers clearly escaped her after she had jumped over the barrier in decent style.

But unfortunately that’s where her luck ran out. She first stumbled over before making a brief recovery as she entered the eye of the water cannon.

She was then flattened with the groans of the watching Bath supporters very evident as to the extent of the take out.

University of Bath Sport published the video on its Facebook page, in a post entitled: “This is the kind of instant karma that shows why you shouldn’t invade a pitch at Varsity”.

It also named the twice taken out student as Millie Grant, who was also understood to have handled the club’s Twitter feed, and was reported to be in decent shape after the mishap.

According to the Twitter feed, the home support was unsure who actually won the match.

But Bath won the overall Varsity fixture, with hockey one of 13 sporting events taking place at the Sports Training Village to determine the winner of the annual event.

The £30 million Sports Training Village is home to two outdoor hockey pitches, including one Sitec water-based pitch which bore witness to this highly memorable video.

Do you have any funny club stories from the season? Email newsdesk@thehockeypaper.co.uk