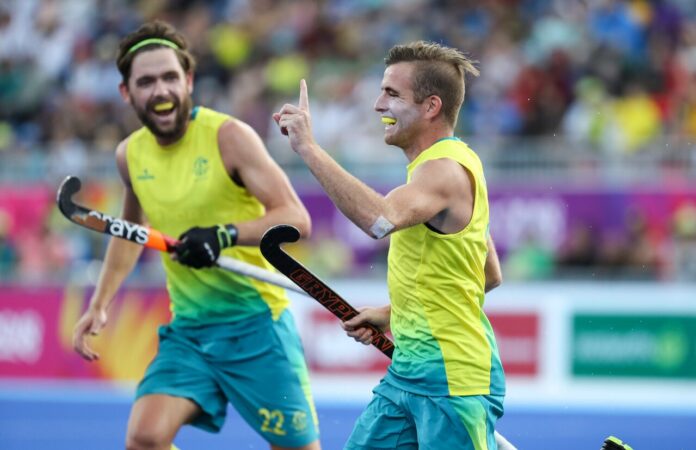 The Hockey Social, our regular dose on what’s happening in the world of hockey, brings you the latest from the Commonwealth Games

Fun after the Games … and during

Many Commonwealth Games athletes have taken to the online dating app Tinder while staying on the Gold Coast – and that includes hockey players. Despite hockey being one of the few events to take place throughout the 11 days of action, that hasn’t stopped some athletes taking their minds off the pitch.

An account claiming to be that of South African hockey player Nqobile Ntuli says he’s after “some wild troopers”, while it is reported that Welsh hockey player Dale Hutchinson also shows off his party side with pictures of him out clubbing and celebrating a tournament medal with a beverage in the dressing room. “We billed the Commonwealth Games as the ‘Friendly Games’ and certainly they’re friendly,” Commonwealth Games Minister Kate Jones said.

Skill sparks wrath of the coaches

“I saw Joycey (New Zealand goalkeeper Richard Joyce) go down a little bit and open up a bit of an angle. He’s really good with his stick and had already made a fabulous save on one of our shots earlier.

“I practice that at home and if you ask the coaches, they’d say they get annoyed at me for doing it, but when it comes off it’s not too bad.”

Jake Whetton describes his brilliant goal in the first half against New Zealand, dribbling along the baseline and scooped it over the goalkeeper’s shoulder.

Racking up the caps

As former captain Barry Middleton took to the pitch against India, the long-serving Englishman recorded yet another milestone. He is now the second most-capped international with 412 alongside Dilip Tirkey, who played for India between 1995 and 2009. Middleton, 34, will go second on his own when England play Australia in the semi-final (incidentally, he reached his 400th cap also against Australia).

Not that Middleton will be even thinking about caps. So how long can Middleton go on and can he surpass the Netherlands’ caps record holder Teun de Nooijer (453)? It is likely that he could do this well before Tokyo 2020 which would make for a significant achievement for a player who must rank as Britain’s most-capped sportsperson.

“When Georgie Parker was celebrating her hockey gold medal at the Glasgow Commonwealth Games she would have laughed in your face had you told her by this Games she would be playing a sport (AFLW) she had never played in a competition which then did not exist.”

An interesting read from writer Robert Craddock in the Courier Mail on why the rise of women’s sports in Australia is hurting our medal hopes. The lingering question, he writes, is not whether more will follow but who will follow. The drain is inevitable.

“We were only together for 10 days in nine months. We are also not used to the heat here given that we trained in Spain where it was snowing.”

Part-time funding and weather patterns seemed to scupper Scotland‘s preparation for the Gold Coast Games, according to coach Derek Forsyth.