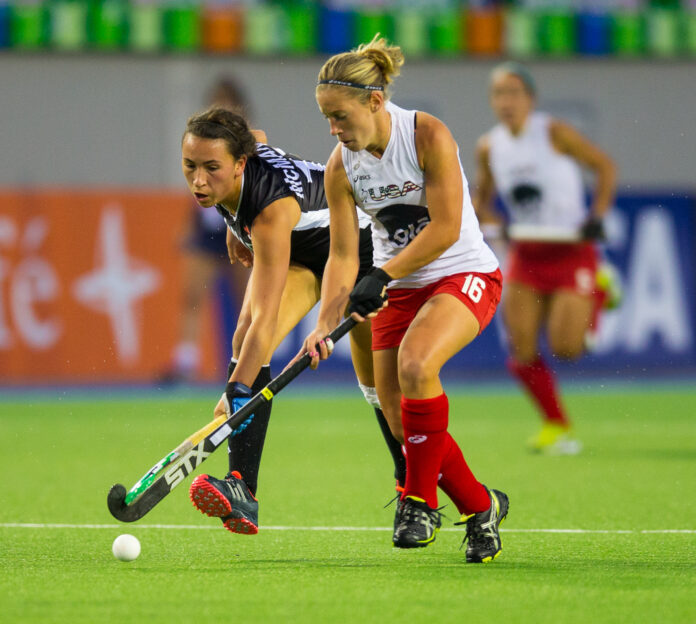 USA striker Katie O’Donnell seemed destined for stardom from an early age. She made her full US debut as a schoolgirl and launched into a stellar college career in the States winning two NCAA (National Collegiate Athletic Association) titles four All American selections and the Women’s Sports Foundation Sportswoman of the year title in 2010. Previous winners of that award include Serena and Venus Williams – that is elite company.

International hockey hasn’t, however, been all plain sailing for O’Donnell. Coach Lee Bodimeade left the then college freshman out of the squad for the 2008 Olympic Games. But she showed the resilience to bounce back and win the 2011 Pan American title with the USA, securing a place in the London 2012 Games. The Olympic campaign did, however, end in disappointment with a last-place finish – a result which led to Australian Bodimeade’s demise and the appointment of England’s Craig Parnham as head coach.

The US setup has now moved to a new centralised programme at the wonderfully named Spooky Nook in Pennsylvania, where solid results against New Zealand and GB showed they were making progress under new leadership. Far from being the ‘new girl’ in the squad, O’Donnell is now a 25-year-old veteran with over 150 international caps.

Push caught up with her in Pennsylvania to find out more about Team USA’s World Cup prospects.

So how did you end up playing field hockey?

My hockey career started as being a ball girl for my older sisters. They are twins and 10 years older than me. They played in high school and in college here in America. I learned the rules before I even picked up a stick.

I got my first stick for Christmas [aged four] and I messed around with it. Once I was in middle school I played for my school team. And it went from there.

Sounds like you are a sporting family – how did hockey win out?

Everybody played sports – all the sports we could play we played them. I usually tell people hockey picked me! It ended up being the thing I was the best at. I made the national team before I had even picked hockey as my sport, to be completely honest.

Tell us more about that.

I was 15 years old and I was playing hockey, basketball and lacrosse. in high school. I made the national team [in field hockey] and continued to play those other sports. Because I was in the national team, when it came to picking to go to college, I chose for hockey. I actually asked my college coach if I could play lacrosse as well but she wouldn’t let me!

What about your position. Have you always been a striker?

I played some midfield at the University of Maryland, but mostly I’ve played forward. I got yelled at a lot when I was a midfielder, for not coming back enough. Defence in the circle is not my forte!

The US national programme has made big changes recently with a new home and a new coach. How is that working out?

World Cup preparations are going really well. Craig has been here about a year and we have grown so much in that year it is remarkable. We played GB and New Zealand in January and now we are playing Canada and we are doing really good things on the field. We are definitely transferring what we are doing in practice onto the pitch.

We had been training for quite a while without any games so we stepped on the field a little unsure about what was going to happen. To see us performing well and to see us bringing those ideas from practice into games is a big confidence boost for the big tournaments coming up.

What are some of the differences you notice with the new regime and the move away from California?

It is a lot harder than it used to be! Training is tough every single day; there is never a down day.

We are also in a great place location-wise for hockey. People are always saying Pennsylvania is the hotbed of hockey. It can be hard when you have people that don’t understand what you are doing around you. Here I am coaching individuals and club teams. Even when I am not at [national] training I am going over the concepts outside of training and then transferring that to the up-and-coming generation. So being here is going to help field hockey in the long run.

Does it suit you personally being back closer to home?

It suits me very very well. I am a homebody. I have total of eight nieces and nephews and I get to see my family so much more and for me that is the best outcome [of the move]. If the outside things mean you are enjoying life, it helps you on the field and you relax a little bit more.

Have you had a glance at the World Cup draw? Argentina, England, Germany, China and South Africa – that is a pretty formidable pool isn’t it?

It doesn’t really matter what pool you are in because at the World Cup, everyone is tough. Everyone is going to be a challenge.

We’ve seen you beat Argentina a few times. What’s the secret to playing them?

It is a game we are always really excited about. We do know them pretty well. I’d say I’d done more video on Argentina than any other country in the world. I like to feel I know them like the back of my hand.

They are also a long-time rival and you just get so excited. When you step on the field there is just an unbelievable energy.

Before that we get a chance to see you in Scotland for the Champions Challenge (Glasgow, April 27 – May 4). Looking forward to that too?

I have never been to Scotland but I’ve heard great things about it. The Champions Challenge will be a great place for us to showcase everything that we have been working really hard on.

What was your perspective on your Olympic Games debut in London?

The Olympics are everything you expect. My team-mates who went in ‘08 talked a lot about things like what the feeling was going to be like walking into the opening ceremony, the first game, the crowds, the dining hall. All of off-field things that come with the Olympics weren’t just what everyone says they are – they were even more.

I loved the Olympics, I loved everything about it except the place we finished. But at some point you have to look past that because it is an experience from which you want to take away that it is a remarkable achievement. I don’t want to look at it and think just of the place we came because that would taint the picture.

I loved meeting the people I met there. I loved playing in front of the biggest crowd I’d ever played in front of.

If you look at the results – you beat Argentina and lost by one goal to Germany, New Zealand, Australia and Belgium – you were close to a much better placing weren’t you?

Yes, and I think we are in the right place now to change that last place into much better finishes.

Just to end, pick out some career highlights for us.

My first international game was pretty amazing. We lost 5-0 to New Zealand, but I was 16 and I had no idea what I was getting into. I had never even played a college-level game so to go straight from high school level to the senior national side was a bit of a shock to the system but it is something I will never ever forget.

Then there is beating Argentina in the PanAm final [4-2 in Guadalajara, Mexico on October 28, 2011] and being part of the team that made hsitory – winning the first gold for America at the Pan Ams. My Olympic experience would be my third. Not in that order, but those are my three.