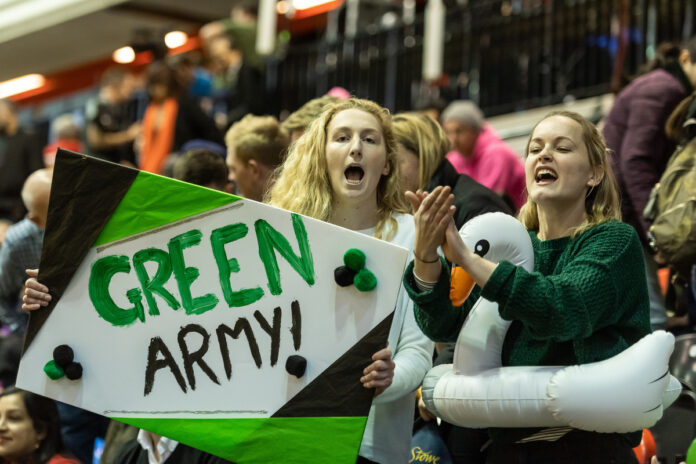 Buckingham will aim to take their historic indoor success – which included an honorary mention in the House of Commons this week – to the outdoor game when the Investec Women’s Hockey League Premier Division resumes this weekend, weather permitting.

Fourth-placed Buckingham’s play-off hopes face a stern challenge when they face Hampstead & Westminster who are second and have won nine of their first 12 games.

“Obviously the confidence gained from performing and succeeding in a high pressure environment and the positivity of winning the club’s first ever national title has been a massive boost and will hopefully spur the girls on to want more,” said Buckingham coach Zak Jones.

The Jaffa Super 6s trophy was recently taken to Buckingham’s junior training evening as the club gears up for a year of fundraising ahead of their first European outing. Their success and backstory will be featured in a Hockey Paper special in our next issue.

Leaders Surbiton resume the outdoor fixtures with a home game against Loughborough Students, while Bowdon Hightown, who seem to play better in the second half of the season after their indoor campaign, host Holcombe. East Grinstead are taking part in the European Indoor Club Cup in the Hague this weekend, which we will also preview in our next issue.

In the Investec Division One South, leaders Wimbledon will be expected to maintain their 100 per cent record as they go to Isca, while second-placed Reading are also on the road with a match at Trojans. Wimbledon’s second team are similarly top of the table in the Investec Conference East and face Southgate.

Exeter University have signed former GB international Simon Mantell in their bid to beat the drop. In a significant move, Mantell will join the students for the remainder of the season. Exeter play Reading in a huge bottom-of-the-table clash.

Indoor champions Surbiton return to outdoor action with a trip to Hampstead & Westminster on Sunday. Sitting pretty at the top of the table with 12 wins from their 12 matches so far and are already qualified for the play-offs

Surbiton will be without six GB internationals who have recently returned from Australia and New Zealand, and Jones added: “Clearly that will affect us and it’s a great shame, this being one of the big match ups of the regular season. But at the Jaffa Super 6s finals we competed without any of our internationals.”

Currently occupying the fourth and final play-off spot, Old Georgians play host to Beeston who are ten points behind them in fifth and will be aiming to close the ten-point gap between the two sides. OG’s will see the incredible return of Sam Ward, who will make his first appearance since his career-threatening injury in November.