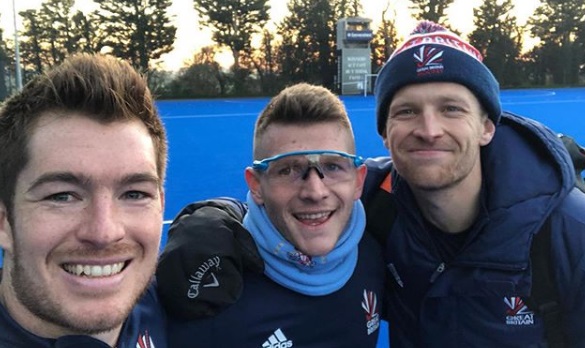 Sam Ward will become one of the few senior male players to wear glasses or goggles as protection when he makes a remarkable return to hockey on Sunday. But that won’t bother him, nearly four months after his career-threatening injury at the Olympic qualifiers.

According to an England Hockey release, Ward will “get minutes under his belt” for Old Georgians in his first return to competitive Premier Division action after fracturing his face and sustaining a damaged retina in November’s Tokyo qualifier against Malaysia.

It will also likely be an emotional one, depending on his pitch time. Sunday’s match (2pm) will be at home against his boyhood club Beeston and will mark a huge step in the 29-year-old’s bid to reach Tokyo 2020 but admits the match will represent the first of several hurdles before he can regain full fitness.

He said: “Obviously I’m looking forward to the game as the next step forwards; getting back out on the pitch for a few minutes.

“I’ve been training at Bisham and played a part in a practice club game in midweek, but I know that the MHL is another step.

“I’ll be wearing glasses and getting used to them while also getting accustomed to the vision in my left eye, so there’s a number of steps for me to take but I’m looking forward to Sunday and pulling on the kit.”

He chronicled his recuperation following eye surgery nearly three months ago in our January edition after receiving the Hockey Writer’s men’s player of the year award.

There had been signs that Ward was beginning to make small strides in returning to the pitch. But few would have believed he would be returning so soon.

He revealed in last month’s Hockey Paper that he had started to hold a stick, hit a few balls and even umpired a lower league game as he slowly got back to training at Bisham Abbey, as well as retrain his eye and attend psychology sessions

Make sure you pick up this edition, a few cracking pieces in there! https://t.co/HfnSqyCM81

“I think I got slated by the opposition coach at one point,” he joked. “I said ‘it’s alright, I’m sorry, I only landed at Spain at 2am this morning. Sorry I missed the odd thing!’”

Ward had previously revealed in a pre-Christmas interview that if he did return to hockey he would “probably wear goggles and a mask”. He added: “I’ll look ridiculous. But it’s not a fashion contest.”

Ward had 31 staples inserted across his head and 31 metal screws in his cheek during his surgery.

Old Georgians currently occupy the fourth and final play-off spot for the season-ending league finals, while Beeston are 10 points behind them in fifth.