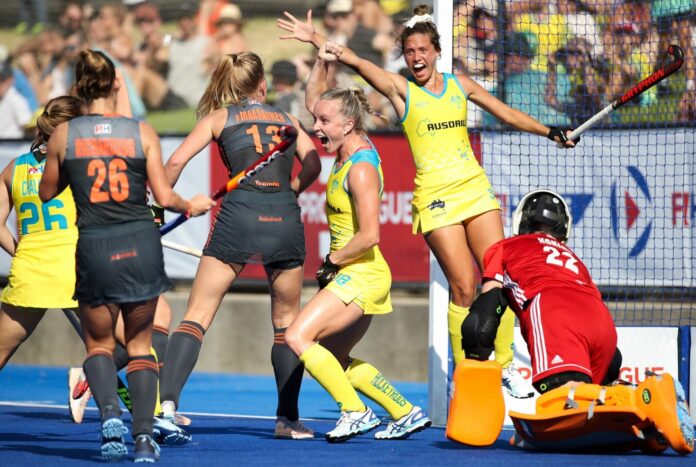 Former world champions Australia men had an opening weekend to forget in the FIH Pro League, as the Kookaurras lost 4-1 to Belgium after seeing a big lead come to nothing against The Netherlands 24 hours earlier.

It was a memorable one for the Belgium teams, who both recorded victories against host nation Australia in Melbourne.

Player of the Match Sebastien Dockier scored twice in the Red Lions’ 4-1 victory.

And there was also joy for Belgium’s women, who recorded a first ever win against Australia as goals from Michelle Struijk and Louise Versavel gave the Red Panthers a 2-1 victory over the Hockeyroos.

Wilting in the heat

The Pro League posed a tough first assignment for Australia men, who appeared to wilt in the 35C heat on both days in Melbourne against the recent World Cup finalists.

From 5-2 up at three-quarter time against the Dutch – where they lost in a shoot-out – the home team conceded seven goals over the rest of the weekend and scored just one more.

That leaves Australia with just one point from two games, while the world champion Belgians have nine points from four away games in Spain, Argentina, New Zealand and Australia.

The Hockeyroos ended almost a decade of Dutch dominance with a ground-breaking 1-0 win over world champions Netherlands in their opener in Melbourne.

The Hockeyroos secured the upset over the world No 1 Dutch, thanks to a number of defensive stops from local gun Rachael Lynch and a fantastic field goal in the 21st minute from Jane Claxton.

The victory was Australia’s first over the Dutch since July 2009 at the Champions Trophy. It was also the Hockeyroos’ first over the Netherlands in 19 attempts.

It proved to be yet another fascinating encounter, with USA pushing Carlos Retegui’s team every step of the way before suffering defeat in the shoot-out.

The match finished 2-2, before Argentina settled a 3-1 win in the shoot-out to remain unbeaten after two matches in the FIH Pro League.

The Red Panthers currently sit second in the women’s Pro League standings after claiming six points from three matches, with their points percentage of 66.7 leaving them just behind Argentina, who have 83.3 per cent as a result of their five points from two matches.

Great Britain currently top the men’s group, with 100 per cent courtesy of their opening win against Spain.