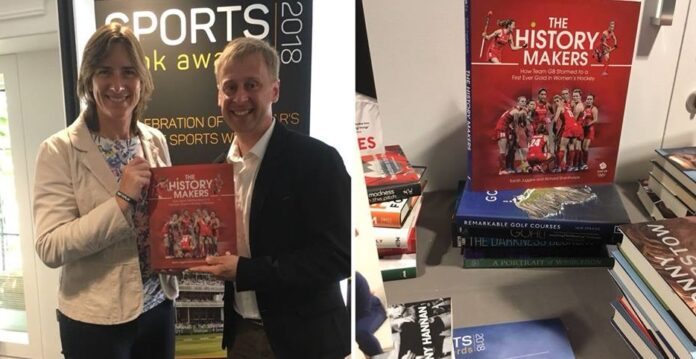 Two English hockey journalists have been nominated for the Sports Book Awards with their brilliant recollection of Great Britain women’s Olympic gold.

Sarah Juggins and Rich Stainthorpe co-wrote ‘The History Makers’ in the aftermath of GB’s Rio win and this week they were rewarded with a nomination in the Thomson Reuters Illustrated Book of the Year category.

Juggins and Stainthorpe, who also work in the media department at the FIH, admitted to surprise over their nomination.

Stainthorpe said: “To be honest, I’m still struggling to get my head around it. As two seasoned hockey writers, this was very much a dream project for us – the stars aligned.

“We approached Sally Munday about it in the weeks following the gold medal win, outlining our vision to create something that would contribute to the legacy of the achievement whilst also bringing some deserved attention to women’s team sport.

“Sally and everyone at GB Hockey backed us wholeheartedly, and we cannot thank them enough for trusting us with this.”

The author also recognised the help of two of hockey’s best photographers in helping to bring the book to life.

“The nomination is fantastic recognition not just for Sarah and myself, but also to our friends Frank Uijlenbroek and Koen Suyk. They are without doubt two of the best hockey photographers in the world, and their iconic imagery brought the whole project to life.”

Olympic Champions Dame Katherine Grainger and Christine Ohuruogu were present in their capacity as judges at the nominations launch.

The awards will be presented at a star-studded ceremony, which takes place at Lord’s Cricket Ground on June 7.