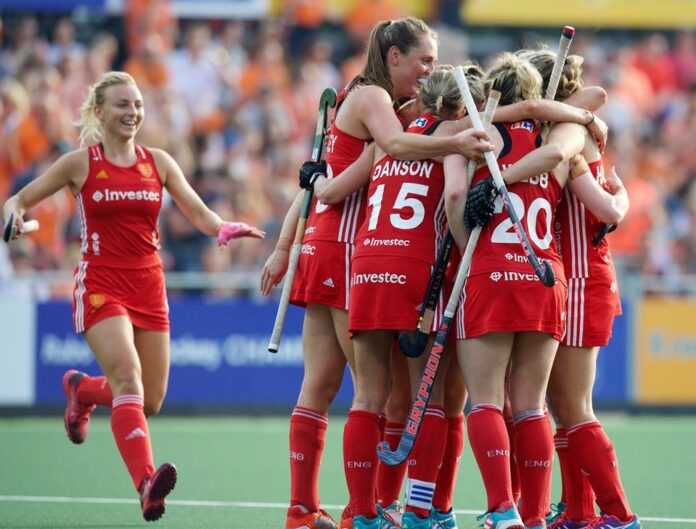 Danson’s weaving circle run in a second-half strike handed the defending champions a 2-0 victory after Hannah Martin had opened the scoring during a clinical team performance here.

Danson said: “There is so much pace, so much talent and we have a big squad, it bodes well for the future. There was sturdy determination and we didn’t stop running.”

As hosts Holland did to stand-in coach David Ralph’s side in the semi-final, England managed to eventually overpower Germany in midfield in large swathes to keep their medal-winning in tact.

They had plenty of penalty corner chances, Giselle Ansley going closest with a low flick wide of the post, while in open play Sophie Bray’s angled shot went the same way after fine stick control from Danson.

At the other end, Maddie Hinch was forced into two booted clearances in the second quarter.

However it was England’s two new recruits who combined for the opener when the fast-paced Ellie Rayer, a midfielder who has shone this week, found Martin unmarked. Her shot on the turn was hit hard, leaving Julia Ciupka rooted to the spot.

At the start of the third quarter, a sliding Hinch averted danger, setting the stage for a period of England possession and neat interchange.

A pressing Germany did find success and space on the left in the final quarter, but there were too many misdirected passes to trouble England.

Despite medal success – albeit the wrong colour given that England are essentially Team GB – one problem area remains with their penalty corner routines.

England garnered five, with only one goal scored in their last 16 and three goals in 26 attempts through the whole tournament.

In open play at least, England have shown here an abundance of pace, thanks to the skilled running of Rayer, Jo Hunter, Susannah Townsend and Sarah Haycroft.

“We weren’t going to leave that pitch without a medal,” said Rayer, 22. “As new players coming into the team, having watched them in Rio is amazing to now play alongside them.

“Pace has always been a part of our game and it is brilliant that there are so many of us. Solid in defence, exciting in attack.”

Hollie Webb – awarded player of the tournament –  and Ansley are two such Rio winners who provided a rock-like defence against Germany.

Moreovever, the duo, who play for Surbiton, scuppered their club coach Brett Garrard’s hopes of assisting Germany to a medal.