In a rampaging match – played in great spirit between the two sides – which saw Mikey Hoare finish on crutches, the rare sight of Barry Middleton limp off and Sanford accidentally hit in the face, England battled with brilliant courage to overcome Germany 4-2 at the Wagener Stadium.

There were several notable displays against a below par Germany. Yet the stand out was offered by England’s defenders; notably by Sanford and Creed.

During the semi-final against the Netherlands, England were outdone by errors at the back which cost them. Moments like these in a game of small margins, perhaps left England chasing bronze not gold.

After the Dutch defeat, Middleton made it clear that while their heads seemed to drop, their hearts certainly didn’t.

And two days later, the pair proved pivotal – including several George Pinner saves, though he was beaten low at his right post again – in England’s final day victory here.

“This was a test of character after how hard we worked against the Dutch,” said Creed. “Liam gets hit and then throws himself around like a warrior. This was a massive team performance.” 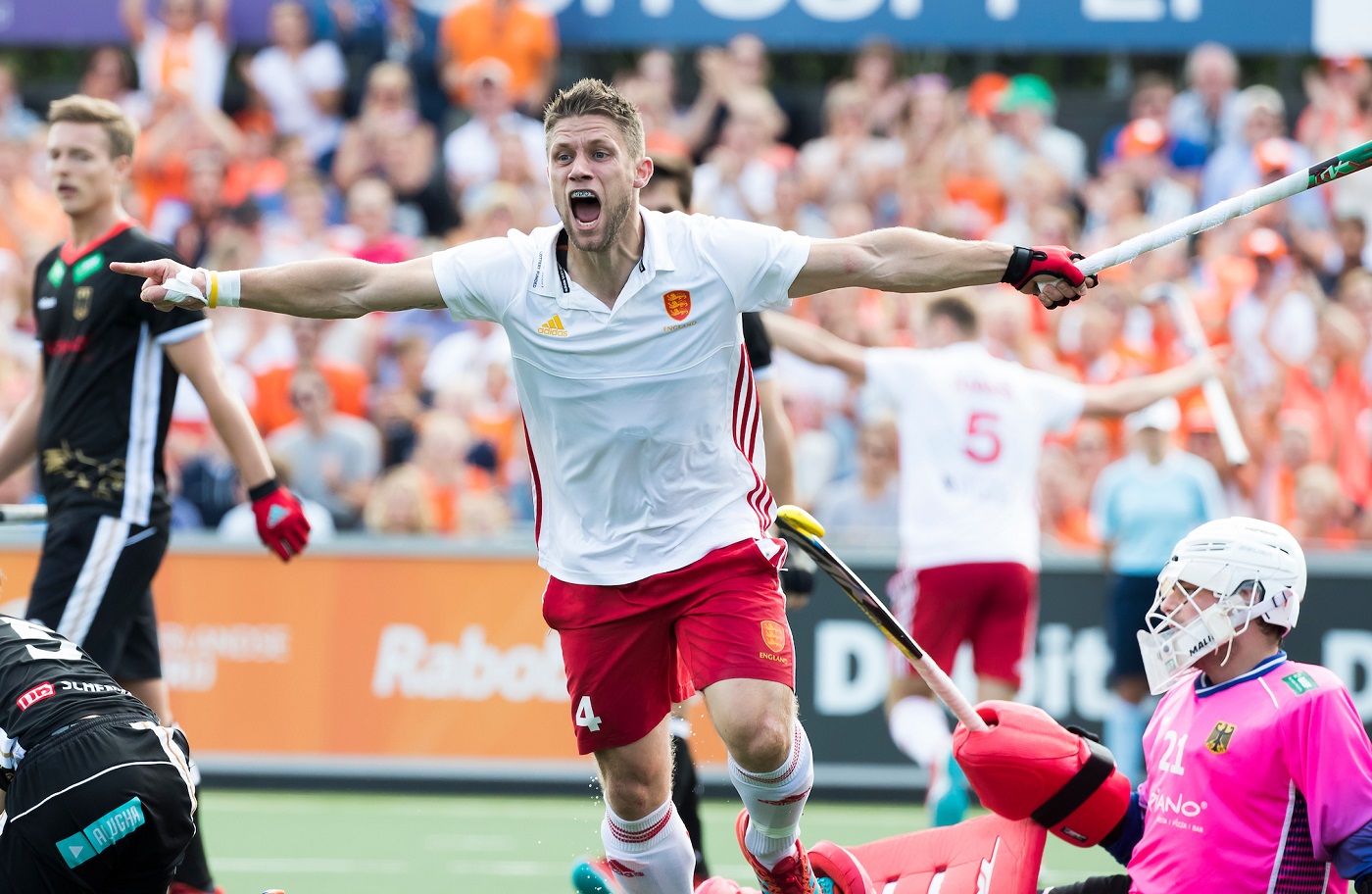 Having joined the senior programme in January and been involved in overseas tests, this was Creed and Sanford’s first major championship tilt.

What an eye-opener for the duo, with Middleton admitting after the Holland defeat that the pair will be forming the backbone of England “for years to come”.

Creed added: “It has been a big learning curve for us. Against Holland, potentially one mistake led to two, to three. We dusted ourselves off and we are learning off each other.

“My head definitely went [against the Dutch]. Two mistakes were mine and I shouldered the blame. It showed but today we pulled together.

“We didn’t want to compound errors and we kept on going into huddles after a few goals. We said ‘why don’t we do that after one goal?’ We did that and got back to the jobs.”

A beaming Sanford backed up his team-mate, as the 21-year-old RAF senior aircraftsman gleaned a bronze medal for the first time in his career.

“It was unbelievable,” said Sanford, as England atoned for their group stage defeat. “We played well against the Dutch and it was tough to get us back up for this.

“We have come into the programme as two new guys and played here with no fear. We are here for a reason and look after each other. Everyone makes mistakes, but we keep playing our game.

“We’ve come into tournaments full of energy feeling as if we can win. It is very helpful. Sometimes we don’t get the result we want but we keep getting better and better.”

How bronze was won

England deserved their half-time lead after David Goodfield had twice gone close to scoring. The first hit Tobias Walter’s helmet, while his second shot went inches wide on the turn.

Germany took the lead in the 17th minute when a penalty corner saw Grambusch slid in from close range.

However England remained composed. From a corner, a pinpoint Adam Dixon pass saw Middleton’s angled deflection fizz into the net.

A rare lapse in Germany’s defence resulted in Sloan unmarked in the D and the Ulsterman had no problem tucking home for his second England goal.

After being sent out of the England lines when Germany scored their penalty corner opener, Sanford atoned in the second half with a cool-headed clearance off the line.

Germany’s threat from their corner routine came to the fore when Pinner was beaten down to his right by an incisive Lukas Windfeder strike in the 45th minute.

The last quarter was awash with constant attacking. And with eight minutes left, Gleghorne’s gallivanting run saw him just reach David Ames’ cross with an outstretched stick and dive.

With Germany forced into a kicking back, England broke on half-way in the final minute. Middleton sent Roper through, the Wimbledon midfielder jagged to the left and tapped home with confidence.

“It was a hell of a match,” he said. “You see Gleg go all the way up to score the goal to win it and that makes all the difference. Sometimes it’s about the heart.

“There was a lot of guts and desire to help their team-mates. We’ve had a lot of fourths under our belt, so this is very pleasing.

“The standard skeeps on getting tougher.

“The physical intensity means it’s an exciting game. You’re on the edge of your seat and you can’t rest at all.”

Except that is for England’s players, who will now be thankful of a three-week break.