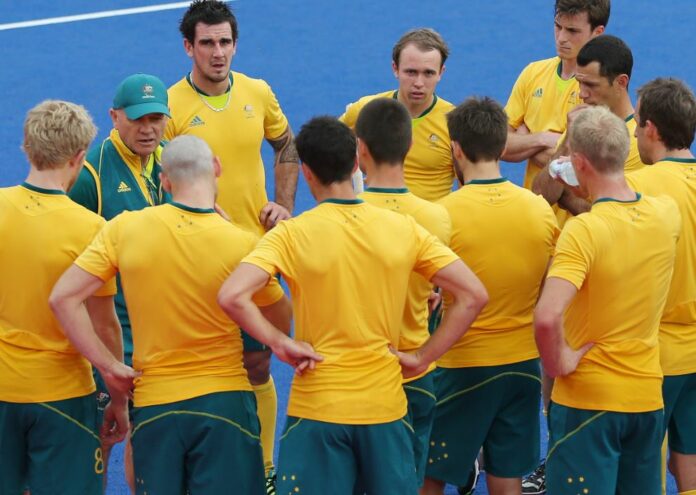 It’s a typical West Australian summer day when I catch up with Ric Charlesworth. Hot. Bloody hot, actually, without a cloud in the sky.

He lives in the fancy Perth suburb of Nedlands and I come through the shady front yard, with its lap-pool and comfortable outdoor furniture, and through the main door into the heart of the home, the kitchen with its large family-sized dining table and view into the back garden.

Carmen, Ric’s wife and the mother of his two youngest boys, makes coffee because he apparently has no idea how to work the machine.

The yard, as they call it here, is just about the size of a tennis court. I’ve played on it, and a decent serve from the deuce side at the kitchen end will swerve right into the chicken coop, but at the moment it’s playing host to a game of backyard cricket between son, Oscar, and two of his mates.

If your father is one of the world’s best coaches – and I don’t just include hockey in that – you’re not going to get away with sloppy standards, even if it’s just a hit-about between friends. However, the first time Charlesworth intervenes is to berate the trio about their application … of sunscreen.  They all troop off, with Oscar returning sporting the full Aussie cricketer look; factor 50 all over his face.

The second intervention comes about half an hour into our chat, after the ball thwacks for probably the fifth time into the feature glass doors courtesy of a full-blooded drive down the wicket. Oops.

However, ignoring the threat to his expensive fixtures and fittings, Charlesworth’s suggestion this time is that they make the contest more competitive, base it around a Twenty20 format and each face a certain number of balls, bowled by each of them.  They roll their eyes.

It’s only then that I notice the boys are not using a cricket bat. Their vigorous hitting, occasional cut and sweep shots and frequent six-and-out piledrivers are being achieved with the handle end of a hockey stick. I suspect that had they been playing tennis, they would have ripped up the stumps and used them to hit forehands.

That’s the flavour of life with the Charlesworths: never pass up the opportunity of a challenge and never take the easy route. However, things have definitely changed since my last visit, which came just after he had decided to call time on his coaching career with the Kookaburras, the  Australian national men’s team. They had just won the 2014 World Cup, thrashing the Dutch 6-1 in the final, in Holland.

On that occasion, his kitchen table was covered with what must have been 50 hard drives containing footage of every game Australia – and probably a whole host of other nations – had played during his tenure as coach. He was going to write another book, he said, and this was part of his research.

This time, there’s still some paperwork – he’s now involved with selling and marketing World’s Best, the recently-released follow-up to The Coach – but there’s also far more signs of the family life which is increasingly taking over.

For those unfamiliar with Charlesworth, 64, and his impact on the sport you should know he was selected as a player for five Olympic teams, competing at four Games because of Australian Hockey’s boycott of Moscow. He won Olympic silver in 1976, World Cup gold in 1980, collected 227 caps and would have made anybody’s World XI across a decade at least.

He also excelled as a cricketer, coming close to a Test cap as an obdurate, left-hand opening batsman, who contributed to three Sheffield Shield titles for Western Australia between 1972 and ‘78.

Off the pitch too he was no slouch. He became a medical doctor and also served for 10 years as the Labour Member of Parliament for Perth, a role he loved but had huge travel demands (commuting from Perth to Canberra is like flying between London and Moscow) and conflicted too much with his hockey career and family.

He embarked on his coaching career when he took over the reins of the Hockeyroos, the women’s national team, in 1993 following their failure to win a medal at the Barcelona Olympics the previous year. His book The Coach details the journey in that role which was eventually to land both successive Olympic (1996 and 2000), and World Cup titles (1994, 1998).

He left hockey after the 2000 Olympics, becoming a consultant with the Fremantle Dockers Aussie Rules team and then performance director of New Zealand cricket. He took a year off, went with the family to Italy and wrote Shakespeare the Coach. However, as a player the Olympic title had eluded him despite four attempts so when the chance came to coach the Kookaburras, he grabbed it with both hands.

They soon became the No 1 team on the planet, proving it emphatically and in style at the 2014 World Cup, but again the Olympic gold had remained tantalisingly out of reach. A semi-final loss in London led to bronze medals in 2012 and what, in World’s Best, he calls ‘The Nadir’. Lucky for him he wasn’t in Rio.

Although he had always insisted he would not be coaching through to Rio (of course, not everyone believed him), he was supposed to carry on until the 2014 Commonwealth Games, a few months after the World Cup.  But, while on the pitch celebrating with the team in The Hague, he told Trish Heberle, the Australian Performance Director at the time, that he was quitting there and then.

“It was the right time to stop for me,” he says, emphasising the ‘for me’.

“I didn’t have the energy and drive to do the job anymore. My boys were 12 and 14 and to be a national coach you have to put your hand up to be involved 24/7 and to be away three months of the year.

“For me it was the right decision. I’m disappointed with what happened after that [the Kookaburras were sixth] but when I left I think the team was going pretty well. They had a shocker in Rio but they weren’t the only team to do that and if you come from Holland you’d probably feel the same way. I think it was an aberration.”

So what has he been up to and why did he write the book?

“The book took up a lot of my time last year but I wanted a record,” he says.

“The Coach was a nice record of my time with the Hockeyroos and there are only a few books on hockey so I wanted to update everything because so much in the world has changed.

“Technically, in sport, there have been such advances, in digital analysis especially. But I also wanted to talk philosophically around bits and pieces which interest me. There are a few of my pet topics – for example, the chapter on ‘Captain’s Picks’ comes from Australian politics but is about being a captain in a group.

“I’ve written about corporate sport which details how I think sport is losing its way and that the drive for the dollar is more important than what is best for the game. I’m not very optimistic, I’m afraid.”

So how does he sum up his record with the Kookaburras?

“If you are the coach of Australia, you are judged on the results of two matches at the end of a four-year cycle,” he says. “And, with the Kookaburras, the one match we lost [the Olympic semi-final in London] probably colours my period in charge.”

He is pretty busy, despite declaring himself semi-retired. He carries out many speaking engagements, he has a lecture theatre named in his honour at the Australian Institute of Sport and also admits he has had “offers” from other hockey countries. These haven’t been entirely dismissed, he says but they would have to be on his terms. No, he adds, he is not touting for business, but I suspect he is tempted.

He is still coaching, but at Christ Church Grammar, where his boys go to school, but he fears for the next generation.

“Kids don’t have to actually play cricket now, they can play fantasy sport on their computers in their bedrooms,” he says. “You can take on the world without leaving the couch and without the reality or drudgery of the hard work and training you have to do to get maybe one chance a week to have a real go.

“I was watching cricket the other day and commentators were talking to the captains on the field, during the game. The boundaries between sport and entertainment are becoming increasingly blurred. Are you playing or entertaining?”

Then, just as matters were taking that pessimistic turn, daughter Kate and two grand-daughters arrive. He opens World’s Best and shows me a picture of Kate and her family: “The best reason to step off the coaching roundabout,” says the caption. He points and smiles.

The fridge, as in any family home, is adorned with pictures, letters of the alphabet, a photo and a grandchild’s drawing of a spider.

However, there’s also an A4 piece of paper upon which is written 10 bullet points. These are entitled: A Formula for Aspiring to be the World’s Best.

Old habits die hard and hockey has not yet heard the last of Ric Charlesworth.