Australia smash in another nine ahead of England game tomorrow 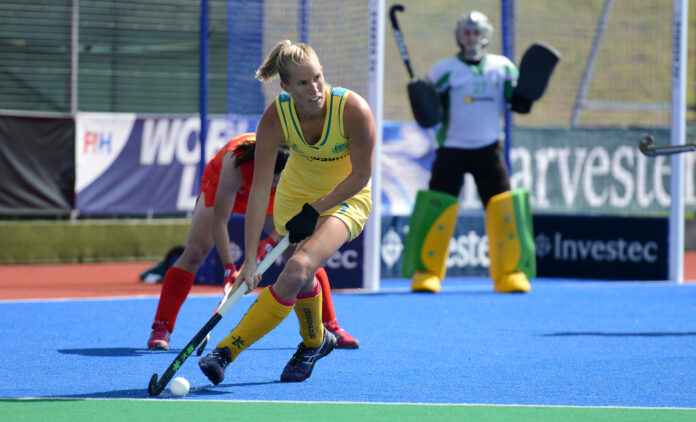 Jodie Kenny’s second hat-trick in as many matches launched Australia’s women’s hockey team to a 9-0 win over the hosts Scotland at the Commonwealth Games in Glasgow on Sunday. The result puts the Aussies on the brink of the semi-finals with a draw in Monday’s match against England enough to see them through to the final four irrespective of other results.

Ashleigh Nelson, Georgia Nanscawen, Brooke Peris and Jayde Taylor also found the target while Anna Flanagan netted a double and was unfortunate not to get her own hat-trick after seeing a late penalty stroke hit the post. Edwina Bone made her 50th appearance for Australia in the match.

It was a comprehensive display of Australia’s penalty corner prowess with the first seven goals all coming from set-plays.

Kenny’s third minute rocket inside the left post indicated what might come, however, the girls in green and gold had to wait for more than quarter of an hour for their second as Scotland reacted to the goal. Saves by Scottish goalkeeper Amy Gibson from Kenny and Jane Claxton almost paid off when, at the other end, Nikki Kidd dived to deflect a cross but it went high and wide of Rachael Lynch’s goal.

When it came, Australia’s second goal was all about improvisation. Kenny’s initial shot was saved and rebounded to Brooke Peris, who could only scoop the ball up and across goal. But quick thinking by Western Australian Ashleigh Nelson saw her bat the ball above her head and into the goal for 2-0. Less than a minute later it was 3-0 as Kenny opted to go low, finding the bottom left corner.

Early in the second half Australia won a series of penalty corners, including the one that would give Kenny her hat-trick. Initially awarded as a penalty stroke, Scotland successfully appealed to the video umpire who overturned the decision but awarded a corner. It made little difference to Kenny, however, as she rifled a carbon copy low flick into the bottom left corner for 4-0.

Her fellow corner flicker Flanagan got off the mark midway through the half, firing into the bottom left corner through a crowd of bodies for 5-0.

Although by now the rain had stopped it was raining goals in Glasgow. Just two minutes later Victorian Georgia Nanscawen made it 6-0 as she deflected Flanagan’s corner up and over the goalkeeper from close range.

Flanagan doubled her tally to put the Aussies in seventh heaven with a top corner flick before Brooke Peris made it 8-0, firing home after Jayde Taylor had dispossessed a defender at the top of the circle. Taylor herself got in on the act with Australia’s ninth goal three minutes from time before only the width of the post denied Flanagan a hat-trick and the Aussies a double digit victory.

When asked afterwards what pleased him more, the defensive strength or the number goals his side is scoring, Head Coach Adam Commens said, “I think it’s both pleasing. I would like to think that we could go through this tournament without conceding a goal. I think we have the capacity to do that. We were very good in the lead-up, not only in the World Cup but also in the practice games. We have continued to improve; we’re trialling players in different positions and I was pleased with how they’ve done that. I think that we can continue to improve for the next matches.”

Looking ahead to Monday’s final preliminary match against England, Commens said: “They’re going to be tough regardless. I’m impressed with how they’ve been playing, particularly in the Investec Cup. They had a difficult first match against Wales but I think you’ll find they’re a team that will grow through the tournament. They were ranked number three in the world before the World Cup and I think they’re one of the gold medal favourites for this tournament and we’ll be treating them as an opponent that can really hurt us if we’re off our game.”

Speaking about the work she’s done in practising penalty corners, Jodie Kenny said afterwards, “We do a lot of training, as much as we can. Getting two hat-tricks in two games is something quite amazing.”