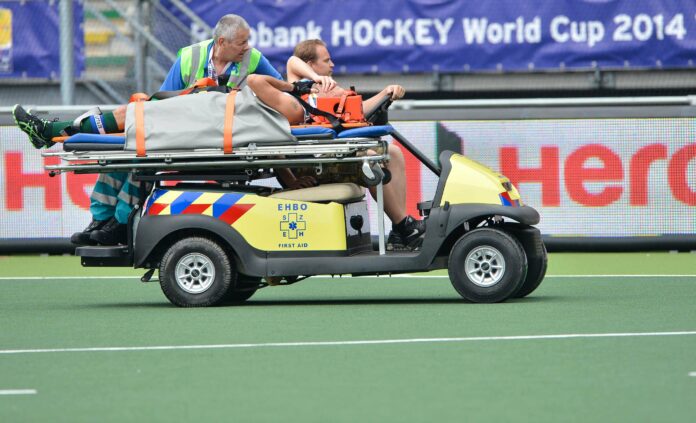 Australia’s Kookaburras cruised into the medal stages of the 2014 hockey World Cup in the Hague on Monday with a comfortable 4-0 defeat of India.

All the goals came in the first half, but the win was marred by the stretchering-off of influential captain Mark Knowles  before the break. The long delay while Knowles was attended to killed Australia’s momentum after they had raced to a 4-0 lead in the first 22 minutes.

The goal-rush started early when Kieran Govers finished off a decent attacking move after India gifted Australia the ball in the third minute. It continued with Chris Ciriello (PC, 16), Jeremy Hayward (PC, 20,) and Ciriello again (PC, 22) rattling the scoreboard along.

That was all before Knowles fell to the ground holding his head in the Australia circle after collecting an accidental hip from SV Sunil.

“We had already made the semi-finals and you don’t want any of your team-mates to get injured,” said Ciriello. “It looked pretty serious – he was holding his neck and not moving much. We need him for the finals – he is part of our team and he is our captain.

“[The semi-final] should be exciting. It looks like Argentina we will be playing now.

“We have played quite a bit against Argentina, they have been out in Australia. We played them probably two or three months ago and we played a practice game against them just before the World Cup – so we know how tough they can be and how good their skills are.

“They have been on fire and [Gonzalo] Peillat’s flicking well so it should be a good challenge.”

With Argentina’s Peillat leading the way in this tournament with seven goals, all corners. It is important for the Kookaburras that their corner team, led by Govers and Ciriello, starts to fire. Ciriello’s brace against India takes him to three. Govers is on one.

Ciriello is content with his corner game going into Friday’s semi-final.

“I’m a bit more relaxed now. The turf is a bit thicker which has slowed a few guys down, but I’m comfortable and getting a few goals makes me happier.

“Hopefully I’ll get a few more in the semi-final.”