Ellen Hoog: ‘It is crazy in here’ 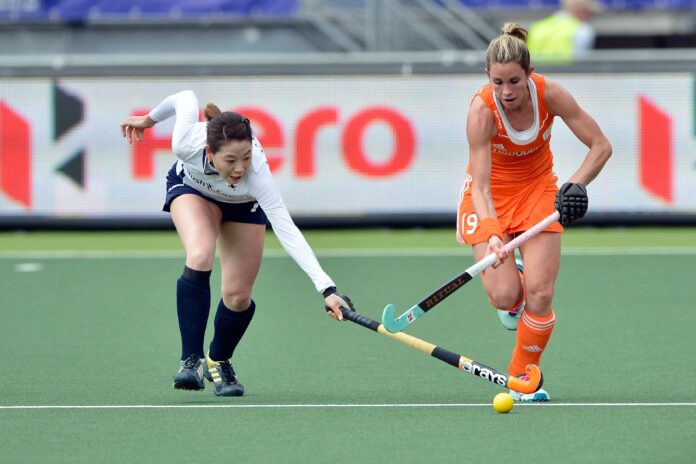 Ellen Hoog has donned the ‘Oranje’ of the Netherlands all over the world but, she says, the Kyocera Stadium in Den Haag, home of the 2014 World Cup is the best place she has played hockey.

The 28-year-old already has one World Cup gold medal, from Madrid in 2006, plus a sliver from Rosario, Argentina, four years later, and Olympic golds from Beijing in 2008 and London 2012. But she has never experienced anything like the atmosphere in the 15,000-seater converted football stadium used for this World Cup.

“It is crazy in here,” she said after the Netherlands sealed first place in pool A with a 3-0 win over Korea in front of another packed house. “The whole stadium is orange. With the whole crowd going crazy it just gives you more energy to score more goals – it is great.”

The win came with a third-minute corner rebound goal from Naomi van As. That was followed by two Maartje Paumen strikes in the second half – one stroke and one corner.

“It is the best stadium I have played in,” continued Hoog. “Because it is like a cocoon, it is very noisy and every day it is almost full – so the atmosphere is great.”

There are some drawbacks to all that noise however – the players find it hard to talk to team-mates on the field. “You can’t hear each other so it is hard to coach each other. But with gestures we can communicate, said Hoog.”

The Dutch will not know who they will face in Thursday’s semi-finals until the completion of pool B. “Tomorrow we will know who we are playing against,” she said. “It will probably be Argentina or USA. Either of those is going to be a great match. And of course with the crowds – we are looking forward to every game.”