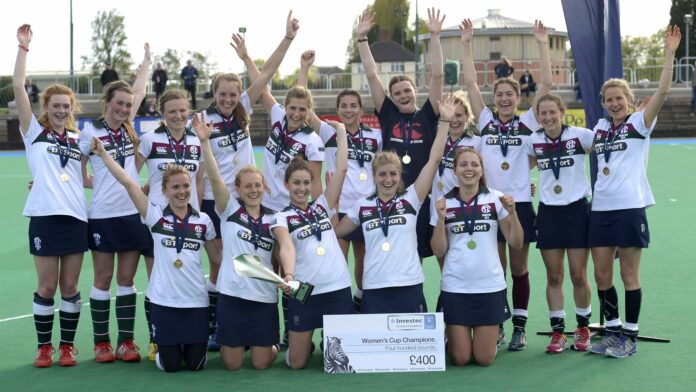 Surbiton ended a remarkable season by adding the Investec women’s cup to their league championship in a comfortable 7-1 victory against a battling Hampstead & Westminster side at Highfields, Nottingham on Saturday.

The league champions got off to a flying start with Jenna Woolven lifting the ball over the advancing keeper after good work from Georgie Twigg on just two minutes.

The lead was doubled shortly after when Rebecca Hertbert was on hand to deflect the ball in from close range from Surbiton’s first penalty corner. The Hampstead & Westminster defence, with an inspired Sophia Perowne in goal did a good job at keeping the score to just 2-0 with Surbiton’s Twigg, Sarah Page, Giselle Ansley and Jenna Woolven all going close.

Surbiton did however find that third goal on 20 minutes through Ansley who dragged a Penalty Corner high into the net.

Hampstead & Westminster’s first real chance of the game came on 22 minutes which saw Emma Stockings close range shot saved after good work from the lively Kike Lawal. Hampstead then enjoyed a good five minute spell of possession but were unable to create any real chances against a well organised Surbiton defence as the teams went into halt time at 3-0.

Surbiton began the second half as they started the first, with Georgie Twigg getting her name on the score sheet with a penalty stroke on 38 minutes. On 41 minutes, Hampstead received their first penalty corner of the match which led to their only goal, with Annebeth Witjenburg converting after a double save from Surbiton keeper Vicky Hewett. T

his forced Surbiton to raise their game, adding a further two goals to their tally in as many minutes through a second Georgie Twigg stroke and Vanessa Roberts strike. As fatigue set in, a scrappy 10 minutes followed which saw three yellow cards. With five minutes remaining, Surbiton put the icing on the cake with a seventh goal through Sophie Fisher-Norton to end their season in style.

Surbiton’s captain Sarah Haycroft said: “It’s a fantastic feeling to add the cup to our league title and qualification to Europe. It’s been a great season which we put down to a squad with strength in depth, not just the 16 players that played in the league and cup finals. We are so happy to win the double.

Henley dominated the early stages of the half and were rewarded with a penalty corner after two minutes, which they were unable to convert. They were ahead just moments after though through Emma Hedges. Didsbury Greys started to get a grip on the game and received their first corner of the match on seven minutes, which came to nothing after solid defending from Jen Buckham.

On 13 minutes, Didsbury were inches away from levelling the game when Jenny Flowers run through and hit the post. Henley dominated the later stages of the first half but were unable to double their advantage with the teams going into half time at 1-0.

The second half was a thrilling encounter, with Didsbury Greys coming out all guns blazing and they were level after just four minutes when Amy Sumner converted after a good run from Jennie Flowers. Henley were still pressing and could have retaken the lead but Kat Green shot wide from a Penalty Corner.

Didsbury then went into the lead for the first time in the match through Lyndsey Fulton who struck an unstoppable shot into the bottom corner from the edge of the D on 45 minutes. Henley pushed for an equaliser but came across a strong Didsbury Greys defence and solid Karen Gamble in goal. That was until Henley got themselves back into the game, with Cleo Lyn skilfully advanced into the area before playing the ball across the goalmouth which found its way into the net.

However, the match was only level for four minutes when Didsbury’s Cath Thompson scored the goal of the game with a powerful shot from just inside the area which rippled the back of the net. Henley pushed forward looking for another equaliser which came with three minutes remaining from a well worked Penalty Corner which saw Rachel Herbert play the ball to Cleo Lyn, who laid the ball off for Jen Buckham to strike the ball home. Then just as Penalty Strokes were looking likely, Henley got that all important goal which won them the Trophy for the second successive year. Jen Buckham hit a hopeful ball into the area, which was converted by Louisa England with a deflection.

Jen Atkins and Nat Boyd were inspirational for Eastbourne as they claimed the Investec women’s vase with an emphatic 5-2 victory over Winchester.

Winchester edged the possession in the first ten minutes of the match but were unable to create any clear cut chances with neither side wanting to give much away. Eastbourne started to press higher up the pitch and created the first chance of the game when Nat Boyd had a shot saved by Winchester keeper Harriet Stratten on 21 minutes. Stratten went onto make a string of fine saves to keep her team in the game. The first Penalty Corner of the game went to Winchester on 29 minutes after a foot in the D, with Rose Evill shooting wide. However, it was Eastbourne that struck first with Jen Atkins scoring her first of four goals. As the Winchester defence pushed forward, Eastbourne counter attacked through the skillful Nat Boyd who crossed for Atkins to calmly convert past the advancing keeper. Eastbourne doubled their advantage just before the break, with Atkins once again on hand to slot into an empty net after a Kat Boyd shot from a penalty corner.

The 10 minutes of the second half started in similar fashion to the first, with very little chances being created although Eastbourne did have a goal disallowed. 13 minutes into the second half and Jen Atkins claimed her hat trick which was once again set up by Boyd in a carbon copy of the first goal. In the 55th minute, the match was well and truly out of Winchesters reach, when Atkins scored her fourth. Eastbourne’s Katie Love went on a mazy run into the D before Boyd’s shot come cross was neatly controlled and converted by Atkins.

However, Winchester were not to give up and they scored five minutes later when Lisa Crack was on hand at the back post to steer into an empty net after a shot from Debbie Young was saved. With just two minutes left, Nat Boyd was to get the goal she deserved after a fine performance, with Atkins returning the favour with the assist. There was time for one last consolation goal at the death for Winchester, with Raych Atkins neatly converting from Debbie Young pass.