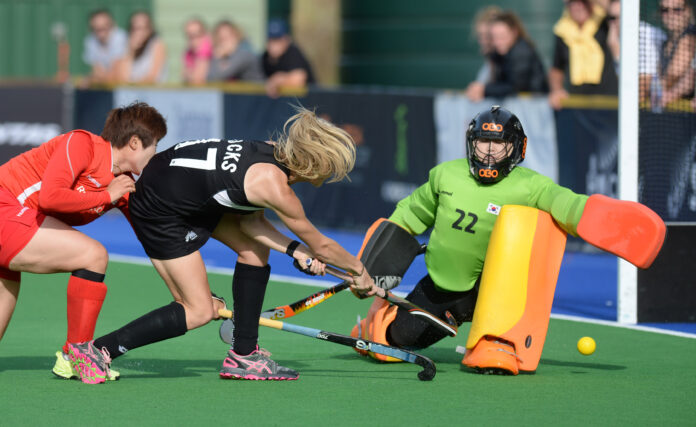 The Black Sticks women lost 4-3 to Korea in their second test at the Fuji Xerox Hockey Centre at Auckland Grammar School in Mt Eden on Saturday – a repeat of the score in the previous test.

“At the moment we aren’t treasuring each instance on the field and making the most of it.  At times today, we struggled to put sequences of passes together and we just need to improve the basics, it was frustrating to concede so many goals again and some of the younger players lacked consistency, ” said Black Sticks head coach Mark Hager.

It was an improved start for the Kiwis compared to their opening spell in last night’s game.  They were tighter on defence and much more composed up front, however despite best efforts, the Koreans were the first to score through Han Hye Lyoung.  The work paid off for the Black Sticks when Canterbury’s Sophie Cocks got New Zealand back in the game and then Olivia Merry put New Zealand in the lead six minutes later.

Following a similar fashion to last night’s match, it became tit-for-tat and Hye Lyoung scored her second to tie it up just before half time.

The second half remained a close contest, the Black Sticks created some great opportunities helped by a few trademark Gemma Flynn sprints through the midfield. But Korea remained relentless in defence, and worked well to turn over ball and earn penalty corners that Park Ki Ju converted in the 55th minute.

Merry gave the Kiwis real hope for a win when she found the back of the net in the 67th minute but despite the Black Sticks rallying to find the winning goal, a last minute penalty corner conversion from Cheon Seul gave the visitors the win.

Anita Punt injured her knee and left the field just before half time, ruling her out of the upcoming games against China this week.

Hager will tomorrow announce a team of 18 for the Hawke’s Bay Festival from the 5-13 April.  The team heads to Taupo where they play two warm-up games against China at Hickling Park on Monday and Tuesday this week at 6pm. Gate sales only.

Both games in Taupo and all the Black Sticks games during the Hawke’s Bay Festival will be LIVE STREAMED on www.hockeynz.co.nz.