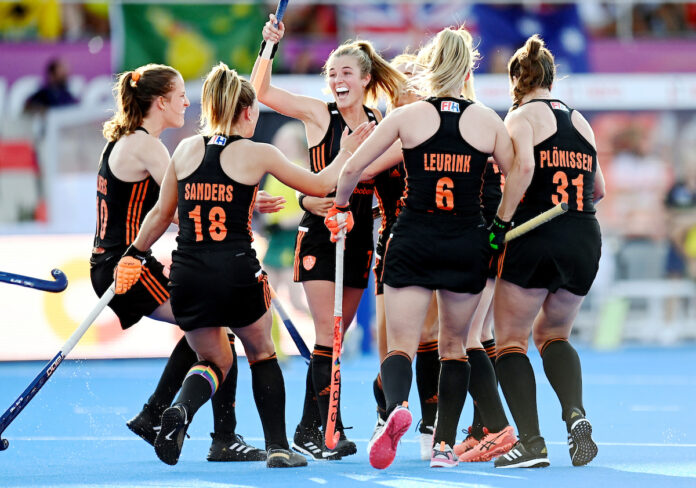 Terrassa — Frederique Matla’s decisive and timely flick – her first goal in four games – after a deluge of 10 penalty corners in a five-minute, third quarter spell finally unlocked the keys to a seventh World Cup final berth in a row with a 1-0 victory at a sun-kissed Estadi Olimpico.

Matla, after an array of attempts were charged down or booted away by Australia’s superb Jocelyn Bartram, scored a 42nd minute winner to set up a final showdown with Argentina and a repeat of the Tokyo Olympic final as the Oranje go for a ninth title in 15 editions.

This was billed as an offensive semi-final, two teams intent on forward momentum. Yet for the first 30 minutes, it was a mix of midfield battle for supremacy and two teams forced to defend.

Bartram had to be in tune early, making a strong post save, while it took until midway through the second-half for Australia’s first shot on goal, a reverse chip from Rosie Malone which flew over Anne Veenendaal’s goal. But the Dutch No 1 was seemingly in control of its height.

After plenty of Dutch circle penetration, their first corner chance arrived with 90 seconds left of the first half, Renee Taylor, the hero of the semi-final with two corner goals, turning defender with a smart stick save off the line.

The soporofic, chess-like battle of the first-half was upended after the local castell team had performed their human tower. Now it was left for the Hockeyroos to do the same.

The Dutch had nine penalty corners during two batches in quick succession, the first of which saw Bartram finally boot clear of danger and Matla off colour with her usually incisive flicks.

A further three, moments later, saw the flying Karri Somerville charge down and Bartram boot clear. The Dutch continued their circle foray, the ball finding Eva de Goede free on the left, with Bartram forced low down and saving off her pad. Marloes Keetels only found Bartram once again.

A three-pronged move the stretch of the field then saw Harriet Shand bring down Lidewij Welten. This time, Matla flung herself at her PC effort, the ball thudding off the backboard past Bartram. The relief was palpable for the now grounded Matla after her opening double in the Olympic champions’ first game back in Amsterdam.

Australia had to survive more circle penetration in the final throws of this encounter, the Dutch ever inching towards a second. The Roos had one last throw of the dice with their second PC of the game. It was charged down, players briefly kneeling to take in defeat, before turning to Bartram at the final hooter for her outstanding work.

Marloes Keetels, playing her last tournament in Oranje colours, said of Bartram’s performance: “We had a lot of corners and she played a great match. We could have played some attacks a bit smarter to create more one-on-ones with the goalkeeper. But she did something really well today as we couldn’t create that second goal.”