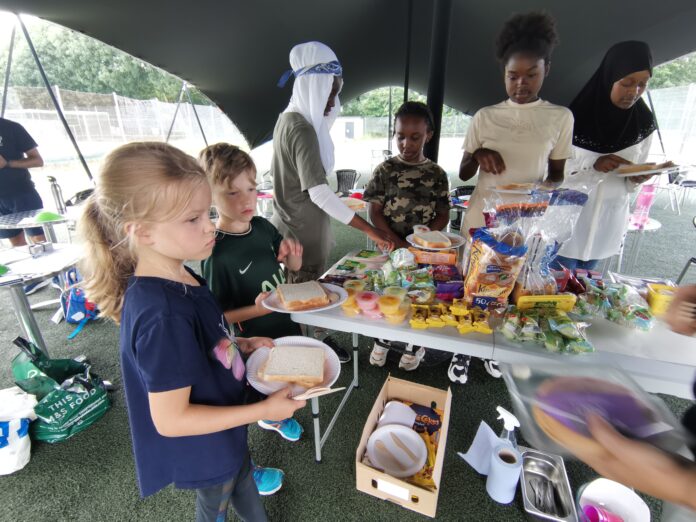 It is the ambition of many a hockey club to become more integrated into their local community and a shining example of this is Leicester City Hockey Club, writes DAISY FORD.

After the introduction of Healthy Activities and Food (HAF) Summer Camps, which were initiated by Marcus Rashford, and the Enabler Fund, Leicester is leading the way in breaking down the barriers that exist when wanting to participate in sport.

Whilst Leicester City, based at St Margaret’s Pastures Sports Centre, have set the tone, it is not impossible for other clubs to replicate something similar.

Sarah Treanor, Leicester City HC’s vice president, says the four-week HAF camps were free for those who qualified for free school meals and available to anyone else who wished to join in for a cost of £60 (although funding was available through the hockey club).

The attendees had the chance to play a variety of sports, partake in arts and crafts activities and even make their own lunch. After its success this summer, the club aims to put on this event in October half-term.

“We are keen that our site is much more than a hockey site… it’s a multi-sport environment,” said Treanor, an ethos that was backed by the recent decision to invest in a Skatepark at the Sports Centre in association with the Council and Mama Skate.

Treanor emphasised that ‘most hockey clubs have got most of the things they need [to expand their community] but they just don’t know that they do’.

Leicester is a ClubMark Club, the accreditation scheme aimed at improving the standards of welfare at community clubs, and all the coaches hold a DBS. The club was then aided by funding provided by city and county councils after responding to the opportunity with their proposal for expansion.

Off the back of the HAF camps, Leicester City implemented an Enabler Fund that hopes to eradicate any financial barrier of attending the hockey club.

Supported by Allianz funding and their alumni network, the hockey club offers this option to its current and prospective members. Treanor says it is ‘a real believer in creating opportunities’.

No doubt this was also a motivation behind the partnership with Ellesmere College, a special needs school, that sends a couple of students to the club to carry out work experience. With three new students due to start this in the upcoming weeks Leicester City wants ‘it to give them a sense of pride about what they are achieving’ and help them to ‘open doors’.

Additionally, before the summer holidays, the club had delivered six weeks of free hockey sessions to eight schools in line with their partnership with Leicester City Schools and Learning South Leicester School Sports. After these introductory sessions, pupils were able to attend three weeks of the club’s academy for free, and, as a result, the academy’s participation increased by 10 per cent. Treanor was ‘over the moon’ and stated that ‘none of this was possible without the passionate people’ of the club.

After five years, the vice-president claimed that the ‘blinkers had come off’ as the club had a vision to improve the site for everyone, not solely its hockey users. The club is ‘lucky’ to have a 25-year lease with their venue but within that time they intend to develop the site, starting with resurfacing the hockey pitch and improving the pavilion.

Equally Treanor and the club’s governance “are really trying to push for someone to lead and support Flyerz hockey” which would occur alongside the current walking hockey provision.

“I hope hockey clubs are able to embrace some changes and not be fearful of looking outside of their current scope in order to increase participation as the time for this is now,” added Treanor. “More people than ever appreciate the opportunities and I hope that so many volunteers who are the lifeblood of the club, can see the benefits as we have seen as they grow and embed themselves into their local community.

The job to make everyone feel welcome doesn’t end but the start Leicester City HC has made to address this has been fruitful. Hopefully, the hockey community will begin to see and be a part of many of these new initiatives popping up all around England.