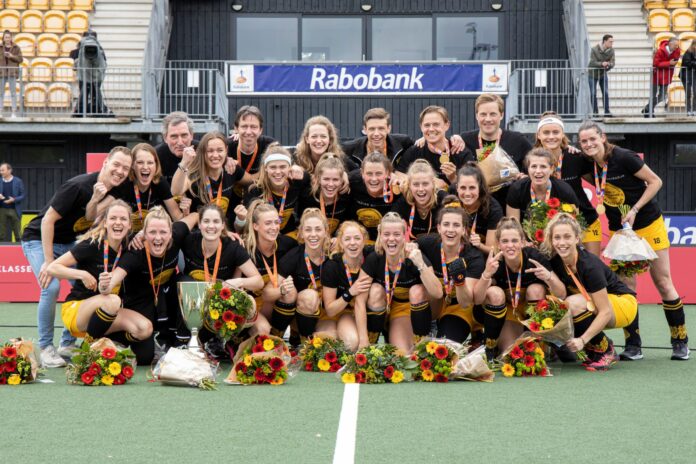 A penalty corner in the last minute from Dutch dangerwoman Frederique Matla secured Den Bosch the domestic title for the 20th time in the club’s history on Saturday.

Matla made sure Den Bosch regained the Hoofdklasse title at the hands of old rivals Amsterdam with a last-gasp strike to spark wild celebrations.

Since first winning the women’s title in 1998, they have won every season bar three. In the last two seasons, Matla has netted 49 times.

It was a fitting ending to coach Raoul Ehren’s tenure. He will now take over the head coach role with Belgium full-time this summer after also making it eight Euro titles since 2009 as head coach.

There was, though, a downside in victory after Lidewij Welten suffered a hamstring late on and is now a serious doubt for the Olympics.

With the EuroHockey Championships almost certainly ruled out, Welten admitted: “Making it to the Olympic Games will be difficult.”

Bloemendaal retained their men’s Hoofdklasse title on Saturday thanks to a Thierry Brinkman double and a shoot-out win over Kampong.

Just like the first tie in midweek, Bloemendaal and Kampong finished at 2-2 before the orange men won 3-1 in the shoot-out.

In a relatively uneventful encounter, the match lit up in the final quarter when Floris de Ridder needlessly poked Brinkman in the stomach with his stick and was shown red.

Brinkman then scored his second a minute before end of normal time and scored Bloemendaal’s second in the shoot-out as the champions won 3-1 from the 23m line.

In a repeat of th 2018/19 final – Kampong had also won the two previous national titles – coach Roelant Oltmans had to make do without the suspended Sander de Wijn and the injured keeper David Harte.

Alexander Hendrickx, of Pinoké, finished as the season’s top scorer with 21.