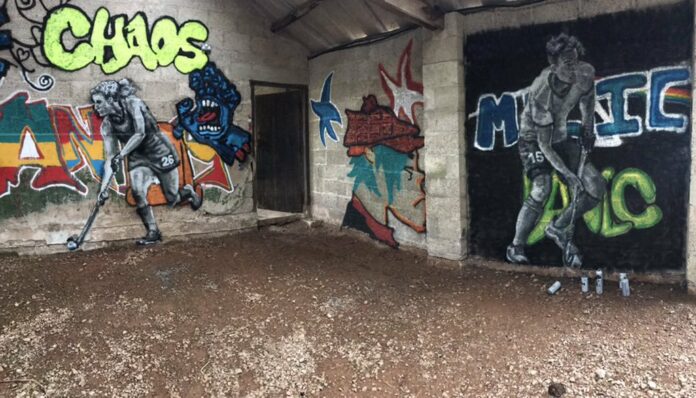 Her ‘street’ art may be adorned on a Somerset barn wall, but Lily Webb’s depiction of two British stars shows that hockey can be more visible through creativity.

Art-lover Lily, 17, took to the walls with plenty of time to kill over last summer as she first painted Lily Owsley and then Phil Roper to social media acclaim.

“I wanted to try something I hadn’t done before,” said Lily, “then I saw a tweet from Brendan Creed about hockey street art. I thought it was a really cool idea and I love art, so I wanted to try it. I also thought black and white paint would make it look a bit like a Banksy.

“I chose Lily because she’s a ridiculously skilful player. Both paintings are done in an old barn in Somerset, across the road from where I live – so not exactly Urban Art. It took me just over two weeks to paint Lily, although it took far longer to paint her than Phil as I hadn’t done it before so I was learning as I went along. I was shocked by the reaction to be honest. When I put it up I never expected that many people to see it.”

Outside of her talent for paint, Lily plays for Clifton Robinsons HC and is currently trialling for England under-18s. Further afield, she has signed to attend Princeton University in the US next year.

“It’s not every day you get the opportunity to move across the world to play hockey,” she said. “Princeton has one of the best hockey programmes in the US as well as being an amazing university so I know it will be a lot of fun.”

For now, it looks like Lily will have plenty of downtime. She added: “I have some paint left and as my exams in the summer are now cancelled, who knows. Although, I will need to come up with some new ideas.”

But what Lily has shown is that with a creative mind hockey can be more visible.

“For my age group I think how social media is run is important, particularly over the last year with everyone being at home,” said Lily. “If hockey pages are engaging and creative, say with cool photography, art or video edits, then I think people want to be part of it more.”

Do you have a story or feature idea? Email us