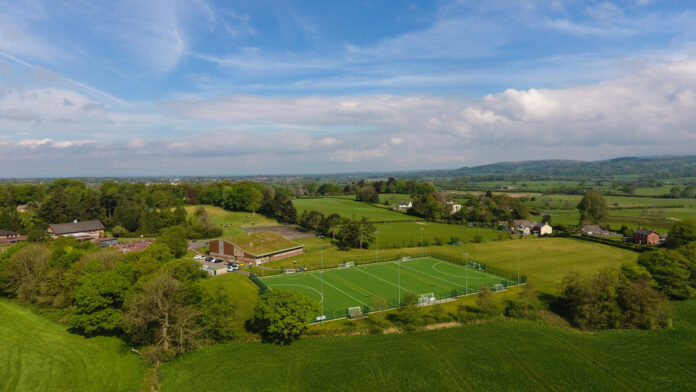 A speculative approach resulted in a Lancashire hockey club finally returning to its hometown after 24 years and a high school being able to offer a year-round outdoor multi-sporting curriculum, including hockey, writes Sarah Skelton.

Over five years ago, Garstang HC joined forces with the town’s Academy to deliver a brand new astroturf pitch, the only one in the Borough’s 108 square miles available for community use, the other belonging to a public school. The pitch was officially opened in September 2018 at the Club’s HockeyFest by double Olympic medallist Hannah Macleod.

Fittingly, completion of the pitch came in the club’s 60th year and a celebratory dinner was held. The fact it did coincide with such a milestone felt just reward to the club’s survival and the huge collaborative effort put in to the project. Sheer determination and perseverance paid off. To have Hannah at both events really was the icing on the cake.

When astroturf pitches were mandated in the mid 1990’s, attempts to build one didn’t get far. Garstang had to move both ladies’ teams four times before settling 15 miles away in 2001. The club lost players, had no coaches, saw clubs fold or merge and battled with those left for players, where very few schools played hockey. Successive committees ensured the 2nd team didn’t fold. Through coaching and enthusiastic Committees, the club has produced growth and success.

At the start of the road home, the club had one pre-requisite; it had to be a hockey surface, which, unlike a 4G, would lend itself to multiple sports. The Academy started identifying funding streams and developing their Local Schools Partnership work while the club built on its ClubFirst accreditation, delivering additional projects in to club and local schools.

Garstang had to demonstrate participation and growth to build credible bids. Primarily a ladies’ club, the club knew it had to open up to boys and men to attract funding. The first success came from the National Hockey Foundation in August 2017. Local businesses and trust donations followed. Then a bid from Sport England effectively made the project fly.

We are so grateful to @thehockeypaper helping us share the wonderful success of our students. #KLBHockey pic.twitter.com/4SsLcWg4fk

The club is now working on attracting the two generations hockey lost when we left the town and delivering ‘Hockey Heroes’ to five to eight-year-olds.

So there are state school facilities out there for entire communities to prosper, not just school age children. Together, Garstang proved it can be done and hope it can inspire others.

The club has since asked the Academy’s Head of PE for Girls (also a well-qualified umpire) to come on board. She’s now coaching the Ladies 4ths, a development team constituting mainly school age. It was felt this would be another good bridge between the Academy and the club and help to bring players through.