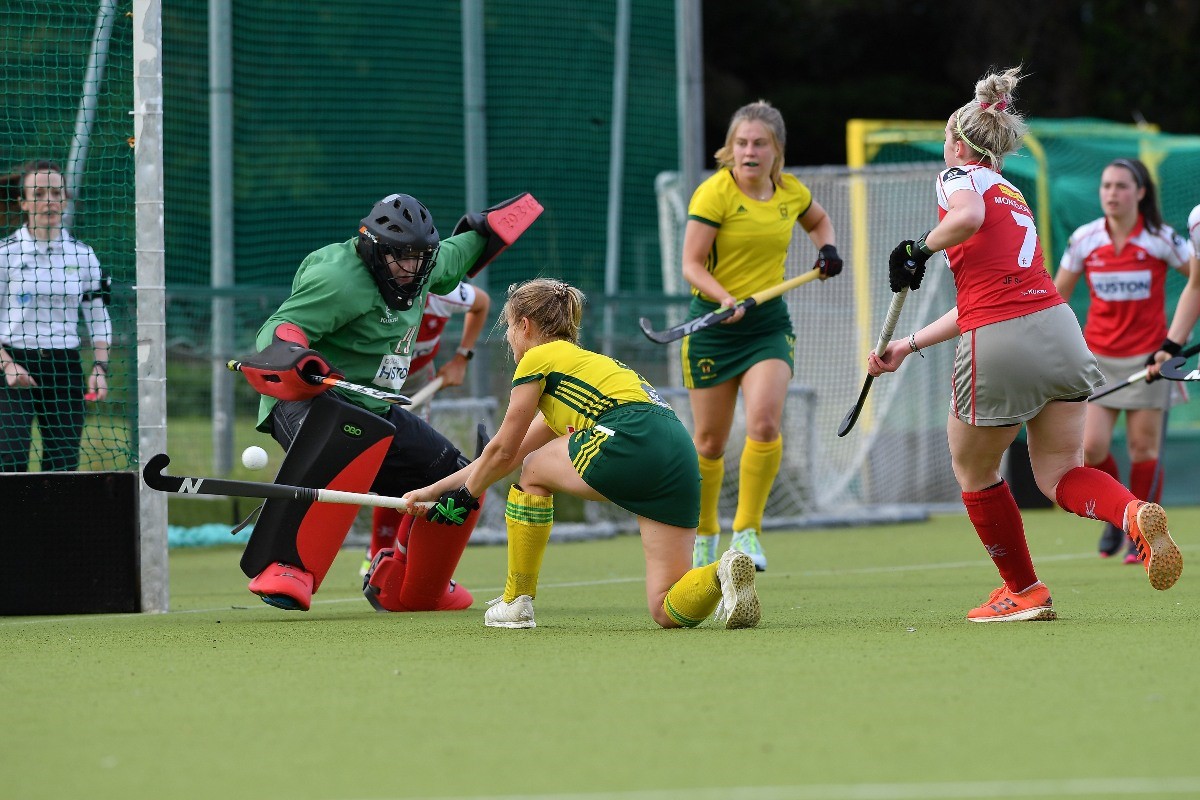 YMCA’s incredible start to the season continued apace as they held off Banbridge at Havelock Park to take a surprise share of top spot with Lisnagarvey after three rounds of the men’s EY Hockey League.

Pre-lockdown, they sat in the relegation playoff place before the season was voided but this year they look in no such danger as Ross Henderson, Grant Glutz and Peabo Lembethe helped them run up a 3-0 lead.

Bann did get back in the mix via Eugene Magee and Eddie Rowe but, like last week against UCD, YM’s penalty corner defence withstood a late barrage to record a big away win.
They sit on nine points now alongside Lisnagarvey who were much too strong for Corinthian who slumped to a third successive loss, falling 6-0. Troy Chambers was the star man, scoring twice and having a hand in a couple of the other goals.

Monkstown’s perfect record was broken by UCD in a 4-4 thriller at the Merrion Fleet Arena in a game where the lead changed hands four times. Town led 1-0 and 3-2 by half-time but also trailed 2-1 and 4-3 late in the game as they struggled to contain Mark Samuel’s roving efforts down the right. Davy Carson, however, popped up with the equaliser to share the spoils.

Pembroke landed their first points of the season with a 2-1 win in a bruising encounter against Glenanne at Serpentine Avenue. Shane O’Donoghue put the Glens in front but fellow Olympian Alan Sothern equalised before half-time and the winner arrived in the fourth quarter from Cian Murphy from Julian Dale’s assist.

Three Rock Rovers, meanwhile, were far too strong for Annadale, recording a 10-0 victory at Grange Road with Ben Johnson bringing his tally to six goals in three games to date.

Dale’s cause was not helped by injury to goalkeeper Sam Hamill at 6-0 with 22 minutes to go. With no recognised goalkeeper on the bench, they decided against padding up an outfielder with the additional complication of having to sanitise the full kit.

Railway Union continue to set the pace in the women’s EY Hockey League as they ground out the points 1-0 from their home date with reigning champions Pegasus at Park Avenue.

It means, with three wins, they now have as many as they managed in the whole of last season while Pegs returned to Belfast from Dublin with nothing to show for their efforts for a second successive week. Kate Lloyd provided the only goal, finishing off from Ailish Long’s baseline pull-back early in the second half to make the difference.

Limerick’s Catholic Institute are the other form side and they recorded the biggest win, 5-1, in the women’s EYHL since back in March 2019 when they swept aside Muckross at Rosbrien.

Naomi Carroll and Louise McCollum traded goals before Roisin Upton nailed a pair of set pieces while Rosie Pratt and Aoife Hickey put Insta on course for seven points out of nine and second spot.

Old Alex lost their perfect record at the hands of Dublin rivals Loreto 4-3. The Beaufort club were good value for the result as they swept into a 4-1 lead with defenders Hannah Matthews and Grace McLoughlin combining for their first three and Grace Donald got the all-important fourth.
Alex fought back brilliantly with Nikki Evans and Deirdre Duke among the goals but Loreto held on for their second win.

Pembroke got their first points of the campaign with a strong 3-0 win at UCD with Sophie Dix and Emily Beatty putting them 2-0 up and Tori Wensley added to that early in the second half.

Cork Harlequins did not travel to play Belfast Harlequins over Covid concerns in the weekend’s other tie on the schedule.