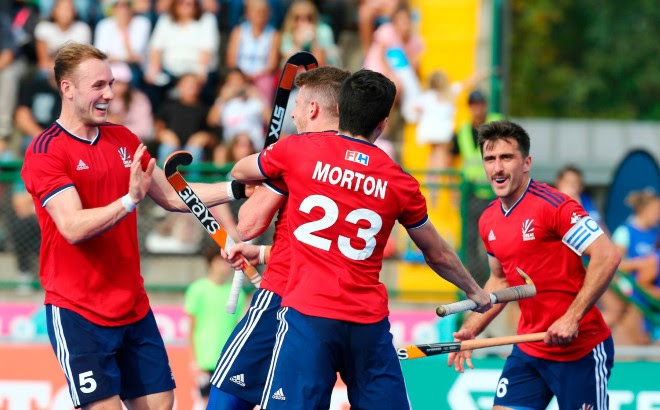 In the end, both current Olympic champions lost out as GB women went down to in form Las Leonas 4-2, while GB men were a class act against Argentina, winning 5-1.

Their win moved them into second place in the Pro League standings as Alan Forsyth and Phil Roper both hit doubles to move GB level on points with Belgium.

Argentina’s women avenged the loss suffered by their male counterparts, with Julieta Jankunas scoring twice as Las Leonas won a fifth successive match and moved ahead of the Netherlands at the top of the women’s standings. Great Britain currently lie seventh in the table.

Forsyth won and converted a penalty stroke midway through the period, before Sam Ward slammed a fierce penalty corner drag-flick inside the left post after he himself had been fouled in the Argentinean circle.

Argentina were on the ropes in the early stages of the third quarter and found themselves 3-0 down when Roper tapped in after a crucial intervention from Liam Ansell, who stopped Los Leones from clearing their lines after Ward had stung the hands of Argentina goalkeeper Juan Vivaldi with a powerful backhand strike.

The hosts were without attacking stars Lucas Vila and Maico Casella as well as long-term absentee Gonzalo Peillat – but stepped up their game after GB’s third goal and reduced the deficit when veteran striker Matias Paredes fired home from close range.

However, hopes of a comeback ended just seconds after Argentina goalkeeper Vivaldi was replaced with an outfield player. The bold tactical move that has so often reaped rewards backfired on this occasion, with Forsyth and Roper claiming their second goals of the game with expert finishes.

“Playing Argentina on their home patch is pretty tough, so I think it’s great to have a win”, said man of the match Forsyth. “Even when we didn’t have the right tempo early on, we stuck at it and we sneaked a goal to settle us down.

“Winning away is very tough, especially coming to a place where we have never played before as a team, against the reigning Olympic champions. It’s a great win for the team and we can now step forward against Germany [in Mönchengladbach, GER] in a couple of weeks.”

Meanwhile Jankunas cracked an unstoppable backhand strike to give Argentina an early lead in the women’s clash.

Goalkeeper Belen Succi’s four-and-a-half game, 234-minute run without conceding – came to an end thanks to a glorious penalty corner from Grace Balsdon, who sent an unstoppable drag-flick into the roof of the Argentine net to leave the sides level at the break.

Jankunas scored her second backhand effort of the game before Victoria Zuloaga drilled a penalty corner strike against the GB backboard.

The result was put beyond all doubt with arguably the best goal of the game, Maria Granatto producing a brilliant deflection to float the ball over GB goalkeeper Nicola Cochrane.

After nearly two years away, we are back this week as a print product for readers.

Determined to see through the idea, The Hockey Paper launched on the back of Team GB women’s gold at the Rio Olympics.