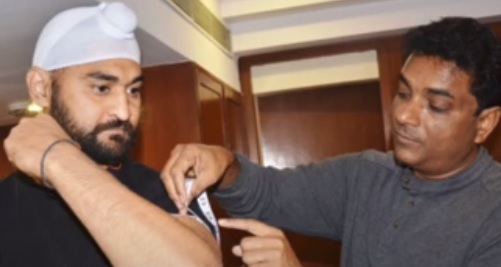 Former India hockey captain Sandeep Singh will join a host of sporting greats when his wax statue is unveiled this month.

The statue of the Indian hockey player will be installed at the Jaipur Wax Museum at the Nahargarh Fort.

He will join the likes of Sachin Tendulkar, badminton star Saina Nehwal and Lionel Messi.

Anoop Srivastava, founder-director of the museum, said: “Sandeep Singh has given many golden moments to Indian hockey.

“And not just his skills, but his comeback to hockey after a life-threatening incident is what makes the lanky defender’s story inspiring for all of us.

“We hold him in high esteem and we are excited to have his wax figure at our museum.”

Singh’s comeback to the Indian national team was realised after an accidental gunshot left Sandeep paralysed and consigned to a wheelchair for two years.

He told Indian media: “It is a big honour for me. I am overwhelmed at this gesture of Jaipur Wax Museum. The museum authorities approached me about two months back with the proposal and I instantly said yes.”

Dhyan Chand is widely onsidered as one of the sport’s greatest players and he will get his own wax statue installed in the future.

The journey of Singh has also been turned into an upcoming film biopic of the hockey player, scheduled to be released this summer.

Aactor Diljit Dosanjh, who plays Singh, said: “I feel proud to be part of ‘Soorma’. Sandeep has never failed to make India proud, be it on field or off it, he keeps setting the benchmark higher.”