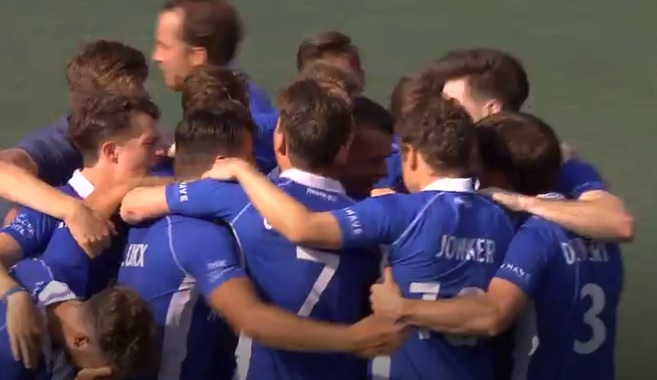 Kampong became Dutch national hockey champions for the second season running after the Utrecht team beat Amsterdam 3-1 – and now have the taste of a double success in seven days when they travel to the Euro Hockey League semi-finals this weekend.

After a 32-year wait for their first Dutch title, SV Kampong proved decisive in their third leg match to lift the trophy.

Second half goals from Robert Kemperman and Bjorn Kellerman saw them to victory after Jasper Luijkx and Mirco Pruijser hit first half goals for both finalists.

“This was the ultimate dream,” captain Quirijn Caspers told hockey.nl. “We were talking about it this week. We knew if we were to become champions, it would be at home.

“What could surpass last season when we finally became champions? Well, this here. This is going to be such a nice party.”

Caspers revealed that a stern talking to the team from Alexander Cox, the Kampong coach, had put them on track for another title success after Amsterdam had won the second match 2-1 to force a decider on Sunday.

“Actually, I do not want to blow too much smoke up his ass,” added Caspers of Cox’s game-plan. “He sat us down in that room today. We watched the video and he was individually super critical but he was also positive and he just picks people up and keeps us sharp. That helped us today.”

A jubilant Sander de Wijn told reporters: “I dare say that we do not have the best team on paper but we have a team. And Al keeps the boys sharp.

“That he has been with the team for six years also indicates something about the maturity of the team.”

Kampong will now go for the double at the EHL in Bloemendaal, starting off with a semi-final date against Herakles on Saturday.

If the opening match of the Tokyo Olympics is a barometer for how this competition will pan out, then...
Olympics

Hockey Paper staff - 24 July 2021 0
If the opening match of the Tokyo Olympics is a barometer for how this competition will pan out, then we are in for a...