EuroHockey 2017: England men tune up for bigger hurdles with 6-0 win over Poland 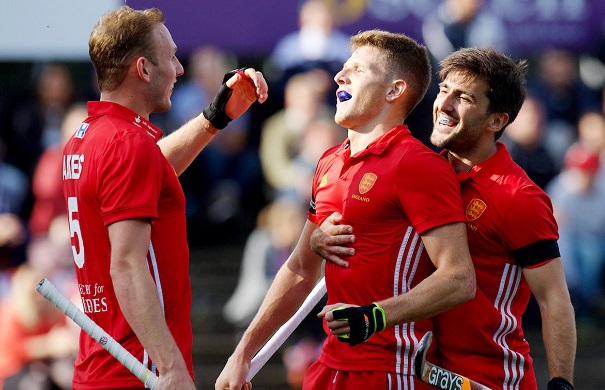 Amsterdam – England men recorded their biggest win over Poland as Bobby Crutchley’s side powered – sometimes laboured – to a 6-0 victory at the Rabo EuroHockey Championships.

The match took on a near training ground atmosphere, with the 9am push back coupled with the stadium announcer indicating that no jingles would be played to respect Sunday church services.

Instead, the big noises at the picturesque Wagener Stadium were found reverberating off England’s sticks as braces from Mark Gleghorne and Sam Ward led the way for a one-way victory here.

However, England did gift Poland several corner routines and they will have to cut out several poor mistakes in patches when they take on Germany on Monday.

“I thought we were a bit thick at times to be honest, either the corners we gave away, or being sloppy,” said coach Bobby Crutchley.

“Some areas were good and when we passed it well, Poland struggled. It looked easy but we weren’t consistent enough by keeping the quality up.”

Gleghorne scored England’s first of the tournament, with a piercing penalty corner strike, high into the net in the sixth minute.

It took until the 20th minute for Gleghorne to repeat the trick, this time with a low hit past the hapless Mateusz Popiolkowski.

Soon after Chris Griffiths’ brilliant run down the right flank saw his cross deflected in off a Polish stick for England’s opening field goal.

Lovely finish from @david_c91 – @proper15 with the assist #EHC2017 pic.twitter.com/FhRHyexwvH

Ward’s well-timed strike down the middle from yet another penalty corner confirmed three goals in nine minutes.

Poland had never beaten England in their previous nine matches stretching back 39 years.

And by now England were well on the way to mirroring their opening EuroHockey 5-0 win against Austria in 2009.

The Poles did negate England’s attacking threat in the last two quarters. But England were home and dry and as the church bells began to ring, Ward made it six of the best with two minutes’ left.

Crutchley added: “We let them have long spells where we were poor. It probably has little reflection on the Germany game. We can have breakfast now.”