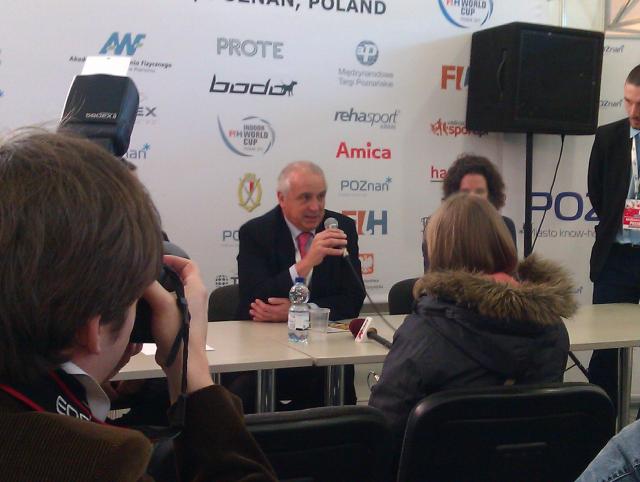 For many hockey fans in the UK the 2011 indoor world cup has been the Twitter cup. An exclusive rights deal between the International Hockey Federation and broadcaster Eurosport – who chose not to broadcast many of the matches in the UK – has left British viewers relying on social networking sites to keep up with the news.

The situation is in stark contrast  to the women’s world cup in Argentina five months ago. That flagship event  was streamed to the world via Laola TV. However the deal done in Poland meant the Laola stream was blocked to European internet users, although fans from other continents could enjoy live coverage from pitch one in Poznan.

A particular point of annoyance for English supporters was the England Iran pool game on Thursday. The game was rescheduled and moved in front of the cameras on pitch one after grumblings about the camera-less pitch two TV blackout affecting the Iranians in particular. It should have been good news for English fans too &ndash; but they were left fuming with Eurosport broadcasting (and internet streaming) South American U20s football instead of the crucial pool game.

“This is the first time we have had an exclusive contract of this scale in place so it is obviously a work in progress, ” said new FIH communications manager Jenny Wiedeke. “This is a first for us and we are very happy to have got the event out to as many people as we have, but there is room for improvement.”

FIH president Leandro Negre said changes were afoot in the broadcasting of events with a “top company” coming on board. But he could not reveal any more details at the moment. “The FIH wants to use all available technologies,” he said.