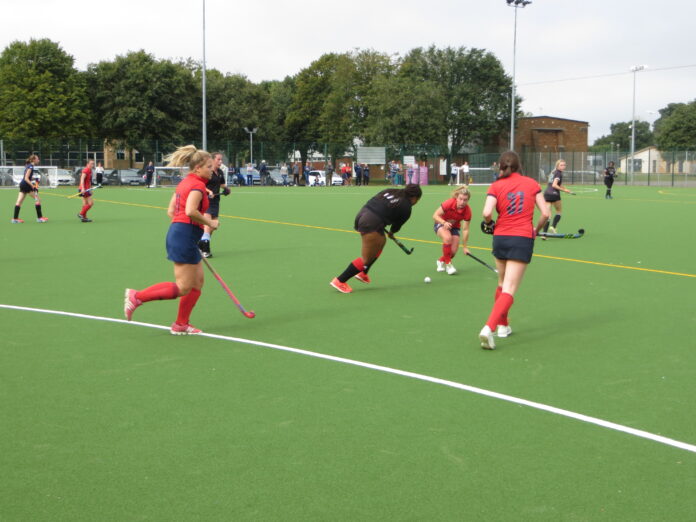 Banbury put last week’s friendly fixture loss against Rugby well behind them as they stormed to an impressive home win against a tough Winchester team.

The first half started fast with Banbury pressurising Winchester for the first five minutes especially down the right through Tyson Nunneley, George Brooker and James Long, and it was a move through the right flank that found Harry Simons near the Winchester left post who expertly scored with a deft slap following their keeper’s initial save, making it 1-0 to Banbury.

But in this end to end half of hockey Winchester were by no means a push over and came back to score the equaliser after 10 minutes with flick following Banbury keeper Kit Lamb’s initial great save.

Five minutes later a great move through Nunneley and Joe Allen and Long fed the ball to Brooker who was unlucky not to score when his scorching shot hit the Winchester post.

Just before half time Winchester won a penalty corner which Kit Lamb saved brilliantly but could not deal with the high volley into the net on his right post.

So after hectic first half Banbury were left 1-2 down with plenty of work to do. Richard Hobley, the team player coach, focussed the squad back on to the game plan and the simple but effective pass and move hockey that Banbury excel at.

The second half couldn’t have been more different as Banbury turned on the class and pulled a stoic Winchester apart.

Within one minute of the start a searing pass and run move between Nunneley and Steve O’Connor ripped through the Winchester left flank and found Brooker at the top right of the opposition D who hammered the ball into the left of the Winchester goal.

Soon after, great attacking work led to a penalty corner which was expertly scored at a tight angle on the left of the goal by Steve O’Connor to make it 3-2 to Banbury.

Banbury further pressed and Hobley found the marauding O’Connor on the right who then gave a dream pass across the D to Jacob Buckner Rowley who made it 4-2 to Banbury with a first time volley.

Theara and Lamb peppered the Winchester defence with a series of aerial passes leading Winchester to make mistakes and give possession away. This led to another Banbury penalty corner and a fierce drag flick by captain Will Kellett to give Banbury a 5-2 lead with 10 minutes to go.

Winchester gave it one last attack and clawed a goal back to make it 5-3 with a drag flick off a penalty corner, but Banbury drove the last nail in when Nunneley hit a perfect 40 yard pass down the right to O’Connor who found Kellett on the left of the Winchester D. Kellett hammered the last goal in from the left to make it 6-3 to Banbury.

Banbury Manager, Andy Camp said “This was the perfect response to our first loss last week and for our opening game of the season. The team lost focus for 15 minutes in the first half but regrouped at half time and absolutely pulled Winchester apart in the second half. This shows what we are really capable of when we stick to the game plan. Next week we face Trojans at Southampton away. We need to keep our heads to get that away win.”

This was the first game of a new full season, which everyone has been looking forward to for such a long time. Due to league restructuring, Banbury Women found themselves in a league higher than they played last time, and it was somewhat of an unknown as to how things were going to go.

It was a pretty warm day, so fitness and stamina were likely to come into play, yet despite the unseasonably warm day, Banbury were on it from the off and were playing high intensity energetic hockey, which Buckingham found difficult to deal with.

Banbury got a short within the first minute and four more within the next 15 to 20 minutes, but unfortunately, nothing came directly from all the pressure that Banbury were applying. That said, it was whilst Banbury were pressing in the D after a short, that on 22 mins, Pip Jones swept the ball past a despairing Buckingham back line.

It can’t be argued that Banbury had the best of the 1st half, but the second half was a different story. Whilst Banbury still had chances, it was pressure, pressure, pressure from a fired up Bucks side, who appeared to be getting more and more frustrated with being behind.

Our ladies soaked up the immense pressure, and the defence held firm; many great tackles were made and the back 4 worked tirelessly for each other. A crucial moment occurred when an unfortunate deflection from one of our ladies was heading for goal, but Krissy Bull was in the right place at the right time, and from the goal line, pushed it away to safety. I think that summed up the great team effort shown by all.

Whilst it could have been 15 MOM’s, the team voted for Pip (our goal scorer) and Zoe (who worked tirelessly and appeared to be everywhere, and on was the pitch for the full 70 mins). Great game, great result and great team effort.

We want your match reports this season as we build our grassroots club coverage. More here