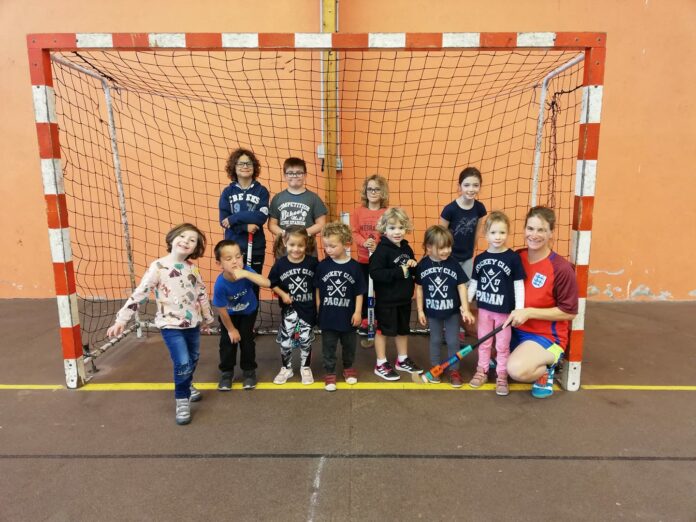 I’ve played hockey wherever I’ve landed: Cirencester, Plymouth and Australia to name but a few places. Playing hockey for the best part of the last 15 years, my husband decided we should move back to France. After so long playing the sport, I knew this would mean the end of playing the sport, which is not a big one over the Channel.

It was probably the right time to take a break; it had absorbed a little too much of my life, according to my non-hockey playing husband.

We moved to Brittany, but as fate would have it I moved to a city that had just opened a hockey club, Quimperois, which is an indoor club and the only one in the county.

After several seasons playing with the club, it began to grow, with a strong under-12 team and an adult team. We moved again, to the same county, and I was faced with the prospect of no hockey, but after a grumble to a fellow English friend we decided to open a new club.

French is famous for many things; strikes, cheese and wine. But the other thing they do well is promote sport. Opening a club was easy. The French Hockey Federation gave us a year’s grace on fees so we could keep the money for equipment.

The other excellent thing the French do is that all sports facilities are free to hire if you are an official club. I could not believe it when I was told this. It has kept our subs low, working on 50 euros a year, and it is a handy tool to motivate people to join.

In 2017 we opened Hockey Club Pagan in the tiny village of Guissény, Finistere. We had motivation and equipment in our first year but it wasn’t easy. Can you imagine convincing the French that hockey exists and that they should really play it? Football has an extreme grip on France, so it was a constant battle. At times we had only two children turn up for a session, while the adult’s session was successful immediately.

The end of the 2018 season the French won the Football World cup, the children in our club promptly left to go join the football club, except one. All the adults left too, except four.

I had second thoughts and was thinking whether it could continue. I had spent May and June the season before going to local primary schools to do free hockey sessions and tasters, hoping that the word would spread. I rolled the dice for the season and opened a few more sessions. We had two in my village, one aged three to five, and one for under-10s.

Amazingly, people came. A slow trickle of children registered. Word spread that hockey exists and that it was fun. We now have 33 people registered, from a starting count of five and have three junior and one adult team.

I am still amazed.

By creating another section in a local village, I have created a league and the goal is to get the three under-10 teams playing each other. After all, the nearest team is two hours away.

It hasn’t been an easy ride. I do question my sanity, but I am pulling it off. I started the club being the chairperson, finance officer, and coach. As the club has developed parents and adults have stepped forward to help me out and I have also found kit sponsors.

Our under-10 team played their first tournament. We were a bit of a rag tag group. But they played well and won matches. They enjoyed it too. We created enough buzz to get sponsors on board and the kids love their kit.

We still can only play indoor and the pitches are often concrete. It scuffs the sticks and it hurts when you fall. But you only do it once. And we always have our annual beach tournament on the coast.

This club has grown and is continuing to grow. One boy plays like he has been playing for years. I believe he will be integrated into the regional team and it is players like this that really inspire me to keep going. Of the other talented juniors, it will be a proud moment when they dribble past me!

The adult section has really improved too. You can’t imagine being the only one who knows the rules of a game and trying to explain it in a second language. Of course, there is lot of banter about being English, cheating and making the rules up.

Now we want to hire a coach/development officer and the goal is to register more players and to keep on beating the drum.

We have funding for a hockey coach 18 hours a week.

To put into place walking hockey, develop the kids hockey section and adults, hockey cycles in local schools and developing the departmental team.

A younger coach would be better. Speaking French is helpful but we can work on that. Just dynamic. Organised. Qualified (degree is an asset). Have a car and love the outdoors (as Finistere is quite an outdoors kind of place).