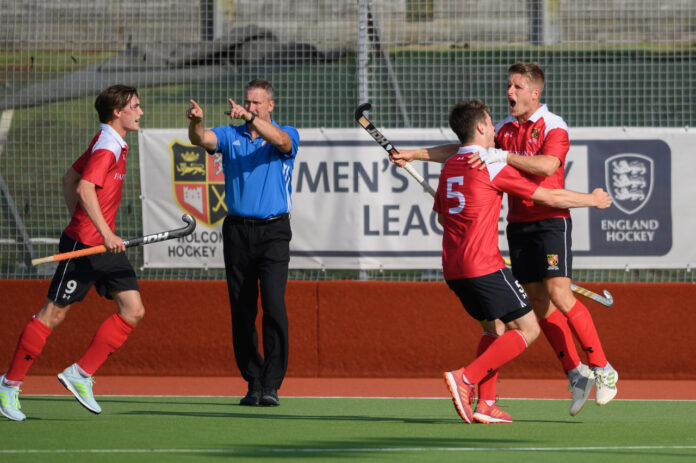 As fresh rivals, East Grinstead is only 13 miles away but it’s been 23 long years since Oxted began the long road to the Premier Division.

The newly-promoted club played gallantly on Sunday but went down 2-1 to East Grinstead, led by their new coach Tim Deakin and assistant David Beckett.

Simon Dobson, Oxted’s chairman, said: “It was most certainly both a proud and historic day for our club. The whole process of getting our club to Premier League started 23 years ago but it wasn’t until I arrived for the game that it all actually sunk in.

“I was greeted by some of those very people that started this journey all those years ago, including some of our junior players who are aspiring to play at this level – they were all there to support the team and that was such a humbling experience for me personally. It really goes to show how much this means to us as a club.”

Luke Emmett’s fourth-minute open play goal and Louis Gittens’ well taken PC goal were enough to secure the points at Saint Hill, before Tim Guise Brown notched Oxted’s historic first top flight goal with a drilled PC – what else with a surname like that – to make for an entertaining finish.

Dobson added: “All we ever ask of the team is to play with pride and recognise the opportunity, which I think our lads did. They played with passion and heart for the whole game and as a spectator, there was always a feeling that they were in with a chance to get a result but it wasn’t to be and credit to EG.”

Holcombe’s Nick Bandurak racked up his 100th National League goal on his way to netting a hat-trick, including a last gasp winner as Old Georgians went down 3-2 at Holcombe Park. Bandurak is certainly knocking on the GB door with his form.

Brooklands men scored in 16 of their 18 league games in 2019-20, only failing to score against Surbiton. They reversed their fortunes on Sunday as Peter Flanagan scored their only goal.

They came close but University of Exeter’s winless run continued against Hampstead & Westminster in the men’s Premier Division; the Londoners have now won all nine meetings.

Clifton women’s only home win over East Grinstead remains their first meeting five years ago, following a 2-1 defeat on the opening day.

Wimbledon women are back in the top division for the first time since 1992-93 – and top the table after a 4-0 win over Swnasea. In their first match in late 2006, Swansea beat Wimbledon 5-2 in Wales.

Defending champions Surbiton had double reason to celebrate as they finally received their league championship trophy and medals after a 3-0 home win over Buckingham. Lottie Ross, returning to Surbiton after playing for Beeston and the University of Nottingham, scored twice from open play.

East Grinstead are now unbeaten in 16 regular season league games following their win at Clifton. Tess Howard gave EG the lead on the quarter-hour but Clifton held out until the 61st minute when Sophie Bray netted.

Holcombe saw a mass exodus of players in the summer and GB international Izzy Petter earned Loughborough Students during a 1-0 win.

There will be two phases to each Premier Division. Phase 1 will see the 11 teams play each opponent once. Phase 2 will see the top six teams after play their five opponents once with the top three teams at the end of Phase 1 earning the third home game. The team finishing top of the top six table will be champions with the other five teams ranked in order.

The lower five teams will play the other four teams home and away (eight matches) with two bye dates as there will be ten rounds of matches in total. The teams in the lower six table will be ranked from seventh to eleventh.