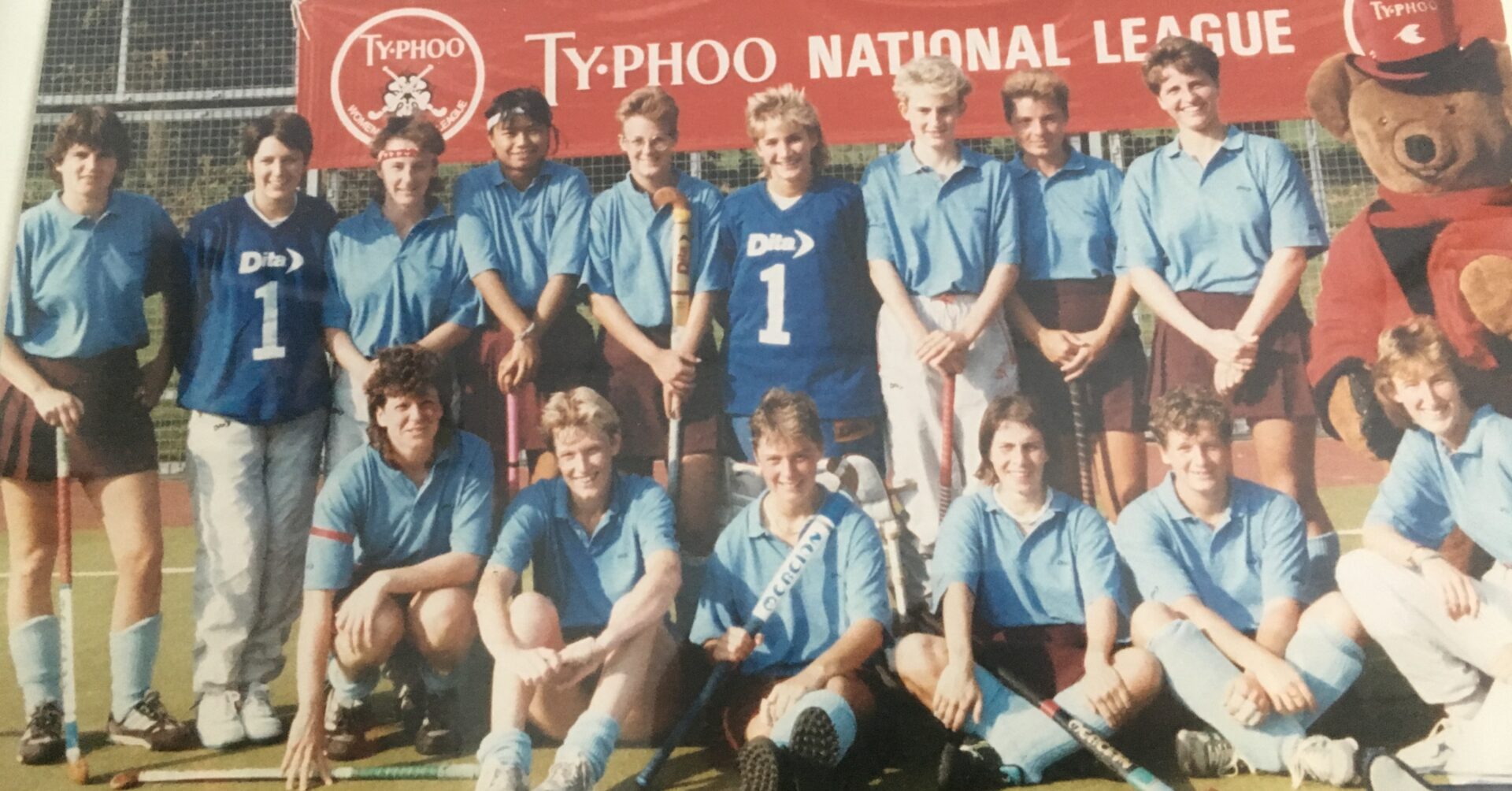 During the 2018 Women’s World Cup, England Hockey put on an event to which all former internationals were invited. It was fun, by all accounts, a lovely chance to meet up with past team-mates and reminisce on bygone days. Lots of photos were taken and shared: the Ipswich contingent, the Leicester contingent and then the Slough contingent, at which point the whole room, yes, the entire room, booed.

“It was good-natured and it didn’t help that we stood up there shouting ‘champ-ion-es, champ-ion-es’, but you could see we were the team everyone loved to beat – and they didn’t often get the chance,” said Sue Knight, a goalkeeper, formerly of Slough and England.

The Slough side of 1989, the inaugural season of the Typhoo National League, were a formidable outfit. The fact that Knight, who went on to represent her country, was the second goalkeeper behind Jo Thompson, illustrates their strength. There was strength of character too, which probably explains a lot: why they just kept on winning and why, on the pitch at least, nobody seemed to like them.

To be honest, you wouldn’t mess with Kate Parker or Lesley Hobley; Slough through-and-through, they took the first team by the scruff of the neck and drove it to sustained success, domestically at first and then as regular medalists in Europe.

“We started doing fitness as well as stick and ball,” said Knight. “Kate was just a nut. I was paired with her once. She did something like 83 push-ups and I did eight. The other girls thought I said I had done 18 but I had to admit it was eight.

“We also trained three nights a week and everybody turned up because they didn’t want to be dropped – but it was fun too. I don’t imagine too many clubs were training that hard – I am not sure how many would be even now.

“We had the internationals, Kate, Jo, Karen Brown and Sue Chandler, but we also had the unsung players who stepped up and contributed just as much. Mandy Pottow, Sarah Rimmer, Annette Stroud and Helen Thornalley come to mind, but the whole squad contributed and we all got on off the pitch as well.” 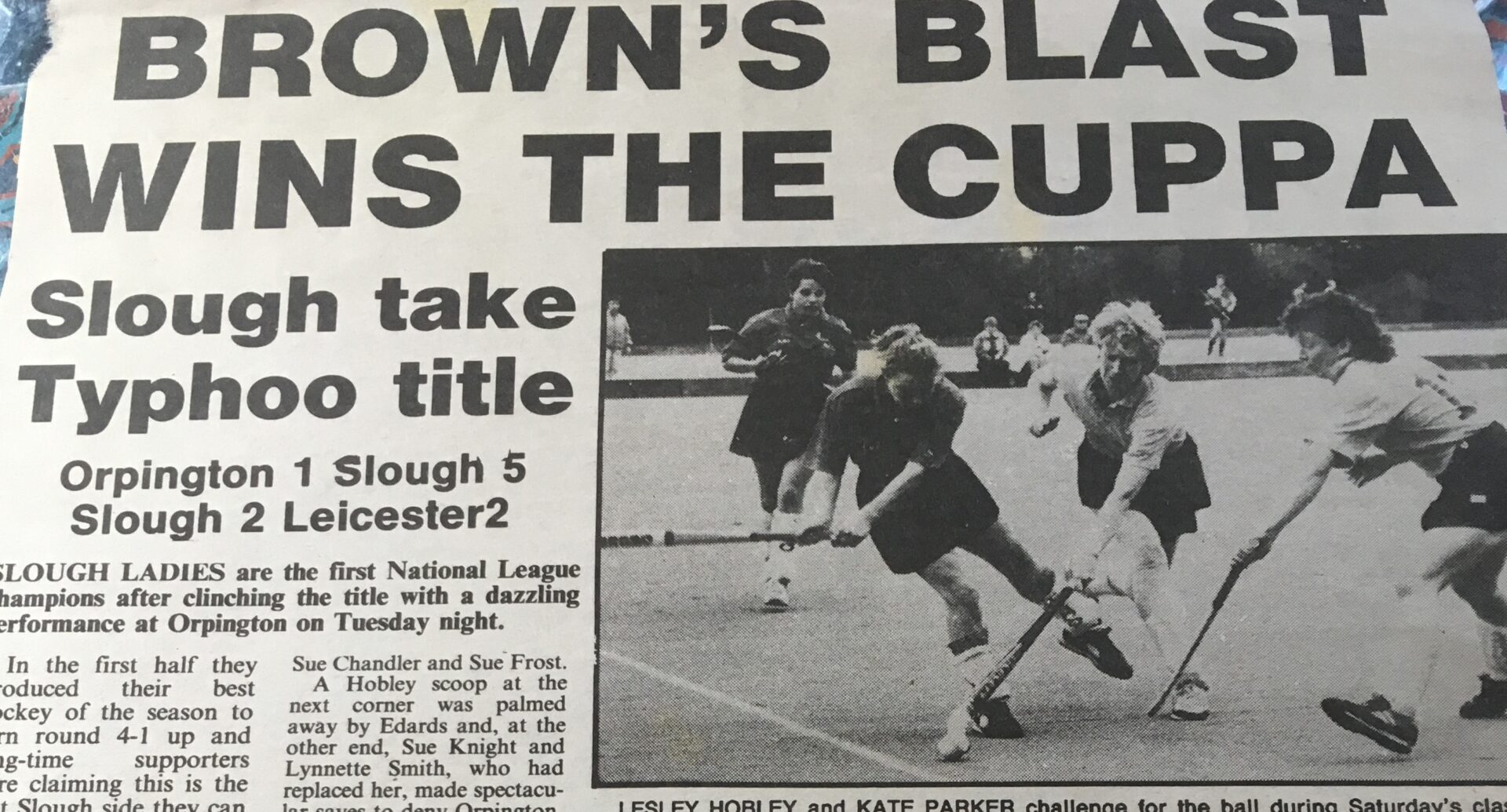 That inaugural National League season was the first baby-step towards a more professional women’s game.

“I remember Lesley saying that the National League was at last going to level the playing field when it came to competing with Dutch teams in Europe, and we took that to heart – it was always a European medal we were aiming for, preferably gold.”

The closest they came was silver, but that’s getting ahead of ourselves. They dominated that first National League season, winning it with two games to spare on a wet and windy night at Orpington, in front of a sparse crowd of die-hard supporters of both teams. In the end, they finished eight points ahead of Leicester and 12 ahead of Sutton Coldfield, who were third.

Annoyingly for everyone else, they won the cup too, the Typhoo Tea Cup, to complete the domestic double.

“It felt so professional just having a sponsor,” said Knight, who enjoyed a successful off-field career in marketing. “We actually had to put a banner up before each game and there was an official player of the match. Even having matching tracksuits was exciting. At the first game at Great Harwood there was actually a mascot.

“Later we got £1200 sponsorship from Canadian Club, one of my brands, but nobody then really knew how to look after a sponsor. Looking back, it was all still in its infancy; we didn’t have a proper outdoor coach, there were no rolling subs and I used to travel the length of the country without the guarantee I would even get on the pitch.”

Their success was maintained for a decade through attracting international players like Sam Wright, Jane Smith, Fiona Greenham, Alex Danson and Kate Richardson-Walsh, and it lasted until Reading’s women climbed up the leagues and provided an appealing alternative for those who were based around the national programmes at Bisham Abbey.

“Winning attracts players and we always did that – but they always stayed with us. We were never as transient as people think,” said Knight.

However, the National League eventually came at a cost – and Slough have not been the only club to suffer. Thirty years on, they have tumbled out of the National League Premier Division and the anniversary season of that first triumph will be spent trying to win promotion back to the elite.

“Our games were all over the country and we even had to travel to Bisham that first season to use the artificial turf for our home games – so we didn’t get back to the clubhouse to mix with the other teams or the cricket and football sections,” said Knight.

“For all the fun we had, and the success, the National League destroyed our infrastructure. It was probably the beginning of the end of the club as a whole.”