Why clubs should offer more ParaHockey 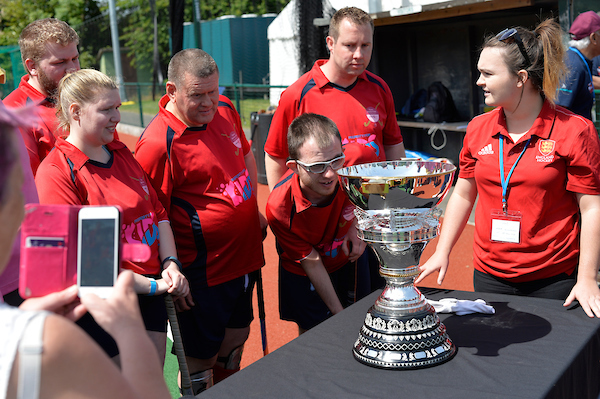 The founder of disability hockey at Surbiton HC is calling on clubs across the country to embrace the sport.

ParaHockey supporters have tried to make ground with world hockey chief’s during the last few years in a bid to gain inclusion to future Paralympic Games.

There are currently around 15 clubs in the UK who are part of Access Sport’s Flyerz programme.

But Access Sport’s vision is for at least 50 Flyerz sections to be running across England by 2020, with the development of local, regional and national events.

“This is about as many clubs being able to offer disability sport and other families who have disabled children given the opportunity to play hockey,” said Jo Brown, Surbiton’s events manager.

“I was determined to not have it just about elite sport and I wanted it to be more than that. Access Sport funds clubs to do it and even though I fundraised myself, anyone can apply for money to start.”

Brown’s journey began last May when Surbiton hosted the EuroHockey Club Cup and incorporated a ParaHockey Day alongside the tournament, in the same week that Flyerz – the term for ParaHockey in England – launched its national awareness week.

Brown launched the Surbiton Flyerz at the start of this season and, although the club has its name associated to the programme, it is essentially a project led by Brown.

There are now two Flyerz programmes, including a weekly Monday session in association with a local school and a monthly session hosted at the club with volunteer coaches.

Brown looked at other ways to promote the sport and via meetings with Hockey for Heroes and Midland Mencap she was put in touch with Access Sport where the project began to flourish.

She had found that there were families in the Surbiton area who were desperate to get their children, who were either disabled or had learning difficulties, to get involved in a sport.

“It has been surprising how little there is out there for the physically disabled and when you go into special needs schools they have little to no contact with other sporting facilities or schools,” she said.

Volunteers were put on courses, while Brown took on the fundraising herself. Now it has launched, there are plans to link up with London Irish RFC and their work with the homeless.

“There is so much potential to help different areas of society through sport and that’s what I have a big passion in,” Brown said.

This story appeared in our relaunch edition. Take out a Hockey Paper subscription for 32 pages of regular hockey!