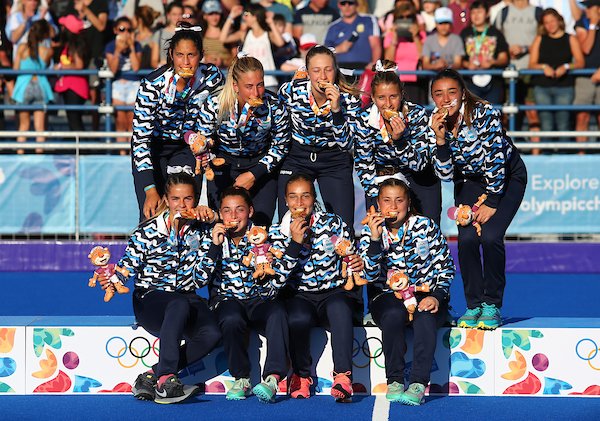 Argentina made a slice of history on Sunday by defeating India in the Youth Olympics women’s final.

Their 3-1 victory marked the first time that Argentina had won a youth or senior Olympic gold medal in women’s hockey.

Having not lost a match in this event, Argentina were stunned as India took an early lead after only 49 seconds through Mumtaz Khan.

After the early nerves had settled, Argentina got into their stride and Gianella Palet levelled after six minutes.

Sofia Ramallo then edged Argentina ahead with nearly nine minutes on the clock to take Argentina into a 2-1 half-time lead.

Within a couple minutes of the restart Brisa Bruggesser made it 3-1.

And while India tried their best to get back in the game Argentina held on to win their first Youth Olympic Games Hockey5s gold medal in front of a jubilant home support.

Argentina’s girls took silver in the first edition of the Youth Games Singapore 2010 and bronze at Nanjing 2014.

China won the bronze medal match with a 6-0 victory over South Africa.

Malaysia won men’s gold as they defeated India 4-2, while Argentina took bronze courtesy of a 4-0 win over Zambia.