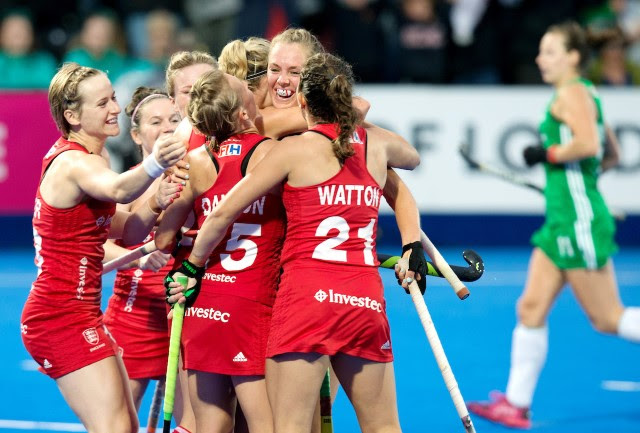 As Sunday’s matches played out, the schedule could not have been kinder for England.

England’s final placing hinged on the result between India and USA. Behind the scenes, there were scratching of heads as to what would happen with a win or a draw.

An Ireland win with two different scores would mean a shoot out with either USA or India, who had to hang around if the scenario ensued. A draw was good enough for the hosts. Even an Italy win over the Dutch would have thrown up a ‘what do England do now?’ moment. Second in the group would have meant avoiding them. A shoot out with India to decide who would finish second or third, would have been plain absurd.

But what is certain is that not even half the crowd, if not more, knew the permutations before the match. They were here to see Maddie Hinch and Alex Danson, judging by the shrieks which greeted their names over the tannoy. They were here just to see England perform – and win.

Suffice to say, England did just that. But only just. They had a set game plan and Ireland were largely battered for 60 minutes with an endless barrage of circle entries (39) and shot (31).

It was clear even then that England were out for a win and not playing around with their World Cup destiny, even if finishing third in the group meant a potential avoidance of the Dutch in the last eight.

“We looked at all the different permutations and very early on, even before we got here, we talked about a scenario “would you rather try to be in a place where you avoid the Netherlands or not?”,” Danny Kerry told The Hockey Paper.

“And I said for me you can go around in a circular argument but that comes down to the integrity of the competition and your values.

“And I said I’m never ever going to be in charge of a national team and not play to win. I made that very clear.

“That was essentially where we were at. In terms of the context of this game we knew the 1-1 result meant there was a scenario where if we lost by two clear goals we could be out of the tournament, so mucking around with trying to decide whether you were trying to draw or finish third was (a) not an option because we play to win, (b) we knew we had to play well to avoid any possibility we could go out.”

England take a late lead in their crucial game against Ireland.

Plain and simple. This was a game to focus on gaining a result, with two stuttering performances behind them. It is certainly evident that England are building momentum, that they are creating chances. At the back they remain resolute and have only seen 12 shots on target towards Maddie Hinch’s goal in three mathches.

Kerry added: “So I have to keep the bigger picture in mind about were we the better team in the matches we’ve played? Yes. Do we need to get better at corners? Yes. I’m pretty happy with the way we’re playing, we just need to commit to the corners.”

England had another 15 last night, with Giselle Ansley finally notching one with their 14th. There was a mistake with an injection and one at the top of the circle, while the flicks were devoid of pace, power and intent.

For the hosts it’s Korea in the play-off match on Tuesday night. For Ireland, it’s a quarter-final against India or Italy.

England are now one match away from meeting the Dutch in their own last eight clash. Looking at Ireland’s potential run into the semi-finals, how they would swap their opening 120 minutes.

“The thought of playing Holland in a quarter-final with a home crowd is an unbelievable opportunity,” said star forward Lily Owsley.

“I’m sure they are not thinking like that and want to play us that early. But playing the world No 1 in our country, where we have beaten them numerous times is certainly very exciting.”