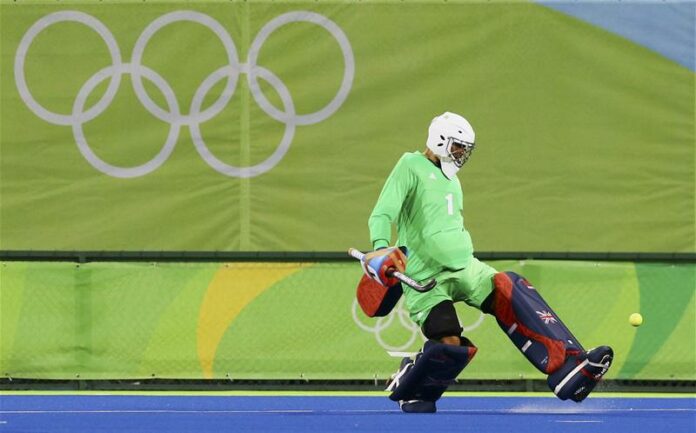 England and Great Britain goalkeeper George Pinner is ready to right wrongs and bounce-back from Olympic heartache in Rio.

Great Britain’s Men’s team, ranked fourth in the world before the Games, were tipped for glory but crashed out in the group stages.

The gold medal triumph of the women’s side only confounded the failures of the men, but Pinner is using the team’s struggles in Brazil as motivation for future success.

“I was devastated following being knocked out,” he said. “We believed we could win a medal so to not make it out of the group was devastating.

“For whatever reason it didn’t click in Rio, but it’s important to learn the lessons and make sure we right a few wrongs from here on.

“I’ve moved on and the main way to complete that process is by winning tournaments.

“I’m not running away from how Rio went, but using it as a driver to win medals with England and Great Britain. European Championships, World Cup, a World League on home soil; it doesn’t matter the tournament, we have to do well and right the wrongs from Rio.”

Pinner and co. will have a chance to do just that at the World League Semi Finals in June next year.

England’s men will welcome Rio gold medallists Argentina, reigning European champions Netherlands, Asian champions India, Korea and Pakistan to London between June 15-25, looking to emulate the success of the women and give the home crowd something to shout about.

And for Holcombe number one Pinner, success on home soil is vital for boosting the sport’s profile in the UK.

“We were fantastically supported at the Champions Trophy and the European Championships and it’ll be great to start the four year cycle off with a medal in front of the home fans,” he said. “They always give us a little extra edge so we look forward to it.

“It’ll be great to play at home. What the women have done in winning an Olympic gold medal has helped hockey in this country.

“It’s disappointing we weren’t able to win a medal but because of the efforts of the women hockey is finally getting the attention it deserves.

“There’s not better way for us to help the profile of the sport ourselves by doing well on home soil.”