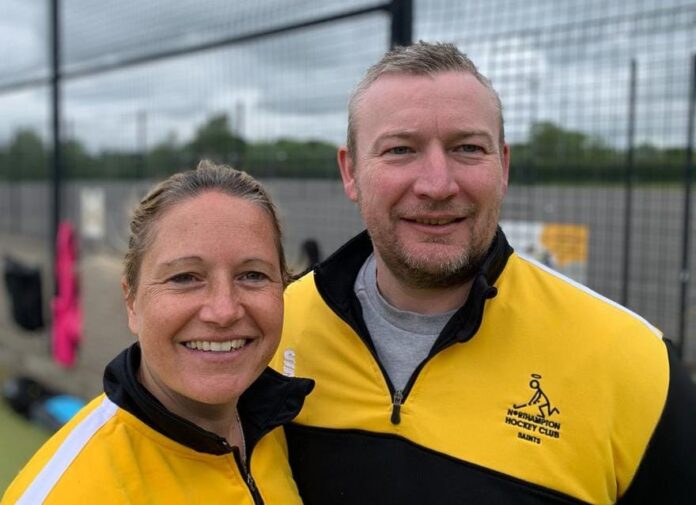 Northampton Saints HC have enlisted the services of Lisa and Simon Letchford, who will lead the club’s development from junior to senior team level.

The Letchfords, who both work at England Hockey, haved moved to the area, having spent several years in Belgium as professional hockey coaches.

Lisa brings a wealth of international Honours including 99 Caps for England and Great Britain, before turning to coaching and becoming the first woman to coach in Belgium’s men’s Honour Division.

She is currently lead talent coach and under-16’s girls coach at England Hockey.

“You get out what you put in,” she said on her coaching philosophy. “I follow this through from my playing days into coaching at all levels. In a coaching capacity, the primary thought is your relationship with the players that makes the greatest difference. I see my role as inspiring people to see and realise their potential.”

Simon is a career coach, having played at the highest domestic level in England. He has worked in roles at premium European Clubs such as Harvestehuder THC in the German Bundesliga followed by Royal Wellington, Royal Racing Brussels, and Daring in the Honour Division in Belgium.

In addition, he worked in both Senior and U21 programmes for the Belgium Hockey Federation. Since returning to the UK, he has taken up a role with Great Britain Hockey as head coach to the Elite Development Programme (EDP).

The married couple have a clear vision by working as development directors at NSHC. “Our purpose is to help shape the club’s direction of travel into a higher-level, more comprehensive offering in the Midlands,” said Simon.

“We are here because we get a family-feel for where the club is at right now and we know, from our past, that is critical to the foundation of future growth. We feel a sense of belonging here both on and off the pitch. It’s important to have a culture where everyone can see their impact and what they are working towards, whether you are a parent, young or experienced player, Coach or Umpire.”

In addition to the director role, Lisa also picks up responsibility for the men’s 1s. The side currently sits in the Midlands Premier Division, one below the national standard.

Club President, Andy Dale, said: “During the past few years, Lisa and Simon have operated at such an elite level that it is difficult to ignore when they are so local to the Club.

“Add into the mix, they have taken up significant jobs at England Hockey, so it was clear to me we had to approach them to join Northampton Saints HC. In our conversations with them both leading up to these appointments, we were deeply impressed with their long-term vision for growing youth engagement, setting new standards and building on the cultural values we already have.

“It goes without saying, this is the most significant appointment in the club’s history. We are all extremely excited to see how the next few years develop.”