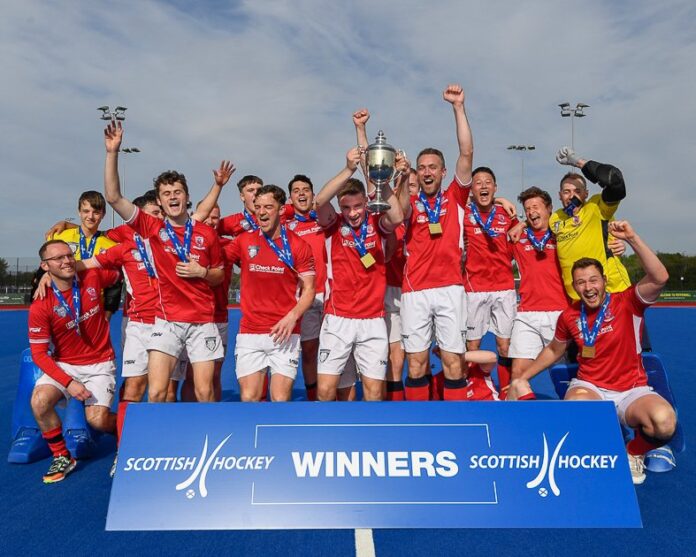 With national indoor and outdoor titles already banked, Western Wildcats cantered to their historic treble with a 6-0 victory over Hillhead in the men’s Scottish Cup final at Peffermill.

It was a competitive and even opening five minutes of the contest with both sides battling hard for possession.

Western Wildcats began to turn the screw and took the lead on a counter attack when Fraser Calder slammed the ball low into the corner of the net. 1-0.

Then Western Wildcats struck a second from a low and powerful Fraser Moran penalty corner right at the end of the opening quarter.

An Andy McConnell drag flick was well saved early in the second quarter as Western went on the hunt for a third.

The third goal came soon enough and it was Johnny Christie who made it 3-0 with an excellent striker’s finish, pouncing on a loose ball and smashing it home from close range.

Hillhead came out strong in the second half and fashioned a couple of chances early doors. A goalmouth scramble led to a penalty corner but the Western defence was solid and defended well.

Western’s pressure returned and McConnell went on a sensational solo run, weaving in and out the Hillhead defence, but his cut back for Rob Harwood was well blocked.

Then a phenomenal save denied Harwood from point blank range as Western searched for a fourth.

As the contest neared its conclusion Callum Duke scored against his old club with a tap in before Adam McKenzie made it 5-0 from close range.

Western Wildcats went 6-0 ahead in the closing stages with a lovely McConnell drag flick to put a cherry on top of a treble winning season.