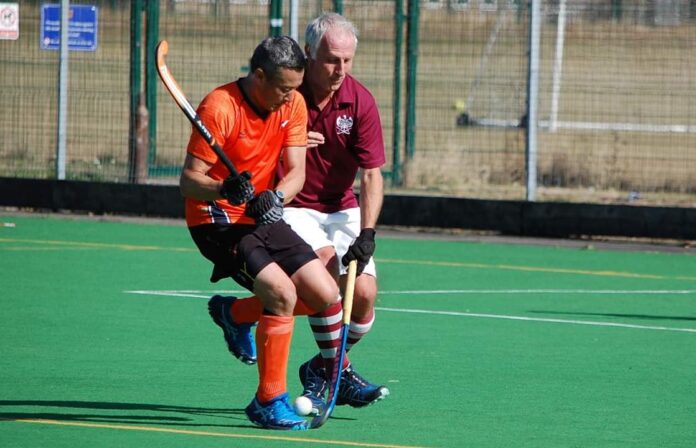 In the latest from our regular series, we hear from Chris Townson, who first played Masters hockey over his wedding anniversary

Nickname: Brian the Snail – an old tour name given about my speed of drinking (slow) in contrast to my speed on a pitch (reasonably fast, I was an England Schools Sprinter).

What city or town do you live in: I live in a village just outside Bedford.

When and where did you start playing hockey:  I was fortunate that school introduced me to hockey. I was a reasonable all-round athlete – regional rugby player, village cricketer, England Schools athlete but only an average footballer.

Why:  So instead of football at the age of 11 I was introduced to hockey.

Wow, how the game has changed since 1973! I played my first league match at the age of 13 for Ely City and still play in the East League Division 6 for Bedford Vets.

Every year for the past 46 years I have played league hockey, I have captained club 1st Teams, been club captain and now coach the younger generation as well as being assistant coach for Hockey Ireland Over 55’s.

I have played regional hockey at all ages and was selected, at 18, for England training with the group that went on a few years later to win the Olympics in Seoul – if only I had been that good!

When and where did you first play Masters?

I grew into masters hockey locally as age took over. Bedford have long had a Vets group and eventually my time came to drop out of the more physical competitive sides and enjoy the social side of hockey more again.

I was brought up playing hockey when teams started playing at the same time and everyone knew everyone. Whilst astroturf is a wonderful thing it takes away for a lot of clubs with a single pitch that element of packed clubhouses and a wide social group.

The idea of a social drink in the changing rooms after the game – win, lose or draw I think sets the tone of what Masters Hockey is for me locally.

My international Masters career started in 2017. On the way home from a Vets tournament in Brussels I took a phone call from Ireland Masters.

I then had to explain to my wife that she would love to spend our wedding anniversary in Verona and not at home as planned.

In scorching Italian sunshine, it was both my first game for Ireland and the very first time my wife had ever watched me play hockey.

What attracted you to masters hockey?

The weather! Having warm days does help both on the body but also the family. My wife and children much prefer watching in sunnier climates.

International Masters is played in the Northern Hemisphere in the summer months, and it means we are guaranteed to at least play – no frozen pitches or snow to contend with. However, the heat in Spain in August is something else! No, seriously, Masters is like a family in many aspects.

Each group brings a dynamic to your life like a family – you have good times and less good occasions. You celebrate the highs and commiserate the lows. But most importantly it is not all about what happens on the pitch it is about life experiences.

I have made many great friends both locally and around the world thanks to Masters Hockey.

As a forward I remember the good goals not the easy misses. I remember my first league game at 13 and my most recent game last week when I could not buy a goal. My first international cap for Ireland – the singing of Ireland’s Call – was really special.

Off the pitch the pride of managing Hockey Ireland Over 55’s to exponential growth over the past two years from nine active players to 58, in a covid lockdown.

All the goals I should have scored! Having to select a squad and telling good mates they didn’t make it. Not having an event to show the world the progress Hockey Ireland has made. We are still the bottom ranked team in Europe and the world.

Any absences from the game due to injuries or ‘life’:

Injuries come and go as age tells on your body. I had hip resurfacing at the end of July 2021. I was back on a pitch in October but only at 30%, things are looking up and I can now play 70 mins of league hockey if required and played internationally again in March 2022.

The friends you make.

Why do you keep playing?

Sport is a big part of who I am. It provides physical challenges and makes me get up and out every day which in turn improves all aspects of daily living.

I do 3 PT sessions a week and run or walk on other days and of course play hockey regularly as well as coach a local club side. I retired from paid work at 55, the unpaid stuff is far tougher.

With International matches between April and September and the body not able to maintain 100% for an entire year the winter league season needs careful management. Also, as an avid skier I put time aside into “high altitude training” of the sunny slopes and a good beer.

However, I play weekend league matches when I can and travel once a month to Ireland for training on a Sunday.

To get into the Ireland Squad for the next big tournament – World Cup 2022 Cape Town.