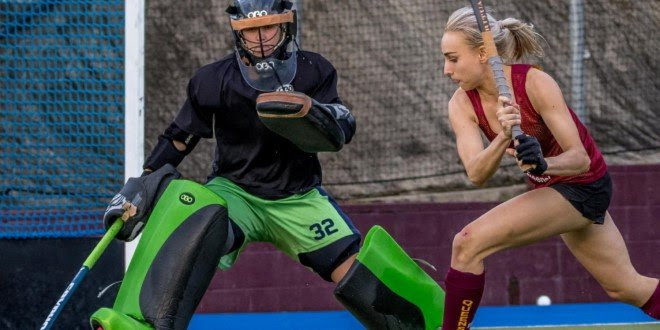 Untried 18-year-old Queenslander Hannah Cullum-Sanders has been included in the Australia women’s squad for the upcoming Tests against New Zealand.

The Trans-Tasman Series will be the first internationals the Hockeyroos have played since last year’s Tokyo Olympics. Adding extra significance to the May 10-15 series is that 2022 marks the centenary of the first test match played between Australia’s and New Zealand’s men’s teams.

Cullum-Sanders was not even on the radar at the start of 2022. Hockeyroos coach Katrina Powell and the selectors first discovered Cullum-Sanders when she was a ‘fill in’ at the national selection trials earlier this year.

Her performances saw her selected in the National Development Squad (the tier underneath the Hockeyroos) and now she finds herself heading to Auckland.

“Hannah is a little unknown, a little uncanny and has attributes we want to see in the attacking line,” said Powell.

“She is untested, so this is an opportunity to see how she goes at this level. She’s got good speed, good fitness and a good goal sense so we want to see how she brings that onto the international stage.”

In addition, Claire Colwill, Hattie Shand and Shanea Tonkin are also excitingly set to make their Hockeyroos debuts in the series. This year’s other new squad addition, Rebecca Greiner is preparing to represent the Hockeyroos for the first time since June 2019.

Cullum-Sanders’ inclusion comes due to the unavailability of Renee Taylor, who continues her recovery from hip surgery she underwent late last year.

Brand and Craig have been playing for Klein Zwitserland in the Netherlands, while Weyer has returned after a season with Royal Herakles in Belgium’s top division.

The Kookaburras’ two other European based players, Matt Dawson and Lachlan Sharp, will remain overseas as their Dutch teams feature in the finals.

James Collins, Craig Marais and Ben Rennie, who all made their debuts in the recent series against Malaysia in Perth, will also travel to Auckland as part of their ongoing development and to cover illness or injury to any of the selected 22.

Ky Willott retains his spot in the squad after impressing during against Malaysia.

“Every time we play we want to see a performance, so we’ve got some matches that we were able to assess with Malaysia and this series will be similar,” said Batch.

“It remains very competitive to get into that final team for the Commonwealth Games. The squad is developing nicely so there will be some tough decisions to make.”