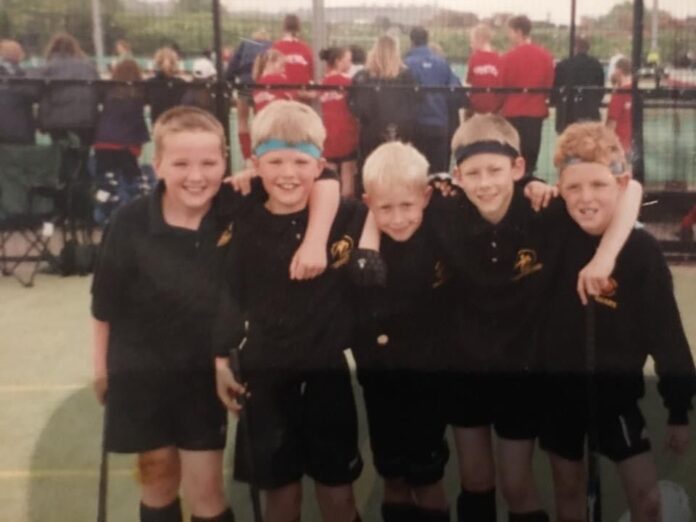 Old Georgians and Scotland defender Andy Bull has partnered with Otter Hockey to create a special stick in memory of his late team-mate Sam Nicholls who tragically lost his life to cancer in 2014, aged only 22.

From a young age Sam played hockey for his school, Greenhill Primary, which is where he met Andy. They played together for a local club, Bury Jaguars, and he went on to play for county and regional sides.

At 21 he gained a sports science degree from Birmingham University, and after graduating and securing his first job, he bought his first car. Sadly, he started to feel unwell in May 2014 and the T-Cell Lymphoma that he was diagnosed with was particularly aggressive, and he passed away in November 2014.

Sam’s family have started a charity in his memory, Sam’s Gift. Their mission is to support young cancer patients through difficult times. Central to the vision is the ‘Journey Box’ – a box containing a letter, a journal, a photo album, pillow spray and eye mask, and other thoughtful items allowing the patient to express their hopes, fears, and wishes.

In doing so, they may feel more positive. So, Sam’s ‘gift’ to them, is the Journey Box, which will hopefully give them something positive at the time at which it is most needed.

Andy said: “Sam’s Gift is so close to my heart. What the family has done in setting up this charity is amazing and it’s something I really want to support. Sam was always brave and positive throughout his treatment, so they aim to try and help others find the same strength.

“He was a keen hockey player, so the fact Otter Hockey have got on board and partnered with the charity is truly fantastic. We hope to spread some awareness and raise some money which will go to producing more Journey Boxes.”

One recipient of a Journey Box said recently that, having being diagnosed with Ewing Sarcoma, they had “no idea of the impact it would have on my life, including on those who I hold dear to me” but went on to say that the gift, in particular the motivational quotes “inspired me to write down what was going through my mind when I couldn’t possibly explain it verbally.”

Kyle Maroo, of Otter Hockey, said: “When Andy approached us with this idea, we were of course delighted to help. Many athletes at the elite level are understandably short of time, so we have been really impressed at the commitment he showed. It has been a pleasure to get this project over the line with Andy.”

Andy said: “Please follow our social media channels, and share when you can. Of course, any donation, matter how big or small, would also be gratefully received! Unfortunately, a lot of us will know someone who goes through cancer at some stage, so we want to help people understand the emotions that come with that as well, which is notoriously difficult for young patients who may still be developing emotionally.”

Every time Andy steps onto the pitch for Old Georgians and Scotland with his Sam’s Gift stick, he is raising awareness of this special cause. Otter Hockey are supporting Andy by mobilising their network of sponsored universities and clubs to attend their 5k fun runs and charity raffles. Their plan is to launch the stick for sale in the UK next season, with a percentage of proceeds going to the charity.

Donations can be made here