The Hockey Museum: bringing the past to life 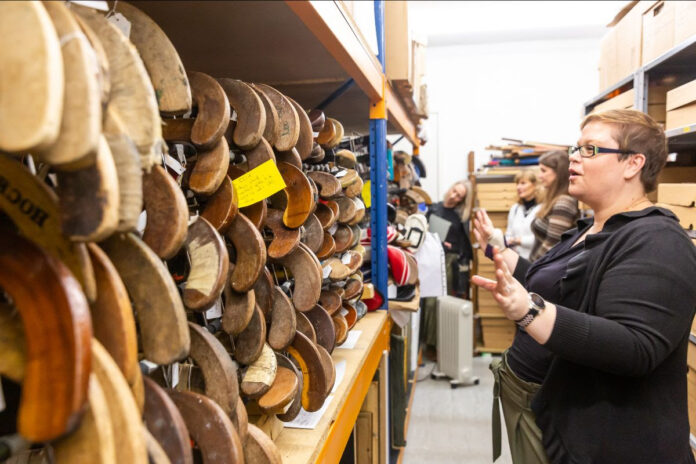 Delving into sporting history was supposed to be one of the legacies of the London 2012 Olympics. But where other plans were scrapped – including the halting of an Olympic Museum in Stratford – hockey has thrived.

There’s the National Football Museum in Manchester, the MCC collection at Lord’s and then there is The Hockey Museum (THM) in Woking.

For those long in the game, the growth and changes in the sport are all too visible. For those who are new to hockey, history should be an important part of their learning and The Hockey Museum provides it in abundance.

Since 2011, the museum has grown exponentially. The tireless work of its volunteers is nothing short of staggering – and now they are rightly trying to show off that work as its vast collection grows by the day.

The Hockey Paper first went along to its first exhibition at its Woking home in 2019 and after spending a few hours in the company of its now outgoing curator, Mike Smith, we have always urged others to go – especially parents and kids – at the marvel of what THM has to offer.

Staff had cherry-picked 11 objects to showcase the sport’s history in its ground floor exhibition area, where Mike passionately told the story behind each item. A THM children’s trail also kept kids occupied throughout the visit.

First, a cine film entree paints a picture of hockey life 80 years ago across the Home Nations, including hockey being at the Oval cricket ground. There are stories behind the Typhoo Tea Cup from 1989, an England blazer belonging to Phyllis Allinson from 1951, delegate’s blazers from the Moscow Olympics and a Subbuteo Hockey game from the early 1980s, reputed to be the only board game devoted to women’s sport.

Several shields are now part of the museum heritage, including the Mitton Challenge Shield, which came into staff hands after 90-odd years when it was last played for. As ever, there is a story behind it. Not least, that by the 1930s more women were playing hockey in the north than the whole of the English hockey leagues, before the advent of the Second World War.

The exhibition moved across to a section of the artificial turf from the London 2012 Olympics, a selection of sticks through the ages and then a World War 2 water bottle, complete with bullet hole. The hockey connection was a remarkable tale. This was but a small selection of the vast treasure trove, either uncovered by the Museum or donated. Exactly how many artefacts was soon to become evident.

As we move upstairs, we pass a collection of pin badges and stamps, with Smith suggesting that THM now has the most complete collection of hockey stamps in the world, a 1951 stamp from Japan being the first stamp issued.

Entering the library is an eye-opening experience thanks to its range of books, magazines and publications across the globe and one can tell that painstaking care and investigation has been taken to acquire these books.

Further upstairs, a volunteer is inputting data on the phalanx of magazines which have either been donated or which the museum has collected.

Then it’s into the nerve centre of the museum – not accessible for visitors – where the archive is kept. Simply put, it is a treasure chest of hockey history, split into areas, with each item documented and tagged.

It is one of many reasons why THM was awarded full museum accreditation by Arts Council England. When the muesum was reviewed, Arts Council picked out several items and were asked to see it logged on the THM system. Some museums are unable to comply, but THM found each item within minutes.

In the room there’s a collection of goalkeeping equipment, overseen by former GB coach John Hurst, ‘The Queue’ where items have yet to be logged, ‘quarantined items’ which will likely be taken to the nearby Surrey History Centre to be put in the freezer for a few days.

We pass a cabinet of old Surbiton weekly newsletters from 1928 to 2000, which the Museum procured after news filtered through to staff that they were being put into an old groundsman’s hut. There are also several rails of three-dimensional items including suits and tops, a huge collection of hockey sticks, balls and trophies.

It is evident that THM is no static charitable trust. The museum has 50 volunteers – “Our fan base,” says Smith – while, when THP visited pre pandemic, there were 12 on duty at any one time, with researchers in the field compiling stories. It also clear that THM will also not be short of exhibitions to put on in the coming years. Their collection and dedication needs to be seen and heard.

Head to The Hockey Museum for opening hours and contact details