My hockey photo was described as ‘shot of a lifetime’, which was exceptionally kind 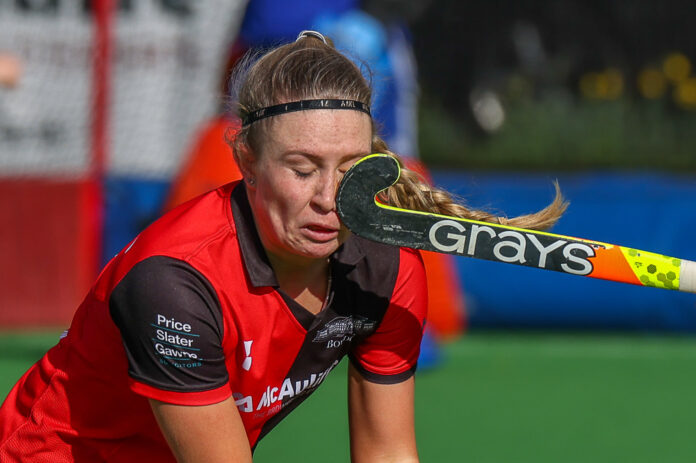 The Hockey Writers’ Club (HWC) has chosen an image taken by amateur club photographer David Bellin as its March photo of the month.

The HWC judging panel said: “Congratulations to David Bellin for his image that he has titled “nothing more than a little Grays”, David also assures us that the player felt the stick make contact, but that it didn’t leave a mark or bruising.“

David’s picture of a Bowdon player is one of thousands he has captured in his 16 years as an amateur sports photographer, which he showcases at Hockey Today. We spoke to him to find out about his love of capturing hockey.

How pleased were you with the image and how often do these types of images come about?

When I was editing this photo, I was delighted and shocked in equal measure. Partly because I was not aware from the viewfinder just how close the stick was to the player’s face. I learnt afterwards that it did touch the skin, but fortunately left no mark. The player was Hannah McDonald from Bowdon Hightown womens 1s.

Shots like this one don’t happen very often. It can be exceptionally frustrating when you think you’ve captured a perfect moment only to realise one essential element was missing.

When everything comes together, in terms of light, clarity, subject and your positioning, you just know it’s a keeper. If I get two or three great shots like this a season, I’m delighted.

What camera/equipment did you use?

To capture this photo I was using a Canon R5 with an EF 100-400mm f/4.5-5.6L IS II USM lens (using a Canon Control Ring Mount Adapter). I recently upgraded to this full frame mirrorless camera, and I’m very pleased with the results.

Are you still learning as you go and how difficult is capturing hockey?

Over the years my equipment has improved significantly. But I’ve never stopped learning. The recent move to mirrorless has introduced new challenges, alhough the eye recognition focusing is truly phenomenal.

Taking photos of hockey is easy, taking great photos of hockey takes patience and practice. Conditions change constantly. One minute the suns in, the next it’s out, the pace of the game means fast focusing is essential. It’s always a compromise. Knowing when to lower the shutter speed to reduce your ISO can be crucial if you want sharp images. I’m always after that perfect photo, just like surfers who seek the perfect wave.

How long have you been capturing hockey on camera?

I’ve been taking hockey photos for about 16 years. It all began when my eldest son started playing hockey aged five. My father-in-law gave me my first DSLR and it just grew from there. I joined the HWC (Hockey Writers Club) Photographers Facebook Group some eight months ago, but last month was the first time I’ve entered their monthly competition.

In fact, it’s the first photography competition I’ve ever entered. Every month I look at the photos from the other professional photographers and that’s when my ‘imposter syndrome’ kicks in. Even when I’ve been pleased with many of my photos that month. It always been hesitant to compete, that is until now.

To have been awarded ‘shot of the month’ is a real achievement for me. It will inspire me to enter again in the future. I loved it when one person in the group described my photo as “Shot of a lifetime”, which was exceptionally kind.

How important is photography for hockey clubs and the work you are doing?

Hockey photography for clubs and players is essential. Not all clubs have a photographer (mum or dad) available or willing to take shots for hours, often in the cold, and then spend equally as much time editing them and sharing them. It’s important for clubs to showcase their teams to help grow their clubs. Though I’m originally from Kent, I live in Cheshire, my home club being Bowdon HC. I’m a huge advocate for Northern hockey clubs and if what I can do helps them even a little, that’s good enough for me.

I still work full-time running a web design company and a networking events company. Hockey photography started as a hobby, which has grown significantly over the years. I love it when players, officials and umpires, comment on the photos. You know that when they do, they really get something out of it.

More recently, I have entered negotiations with Y1 Hockey for them to use my photos for their promotional purposes. This is a particular highlight for me. Chris Rae, co-founder of Y1 Hockey, has often contacted me about my photos, and we’re looking to formalise the relationship.

How useful is the Hockey Writers’ Club competition?

To being approached by Y1 to use my images, coupled with winning a photo of the month competition, can perhaps allow me to ditch the feeling of imposter syndrome once and for all. Though I might still refer to myself an amateur sports photographer.

I’m grateful to the HWC Photographers Group (contact the group to join), as the members are very generous with their advice, from taking better shots, to dealing with copyright infringement and many other topics.