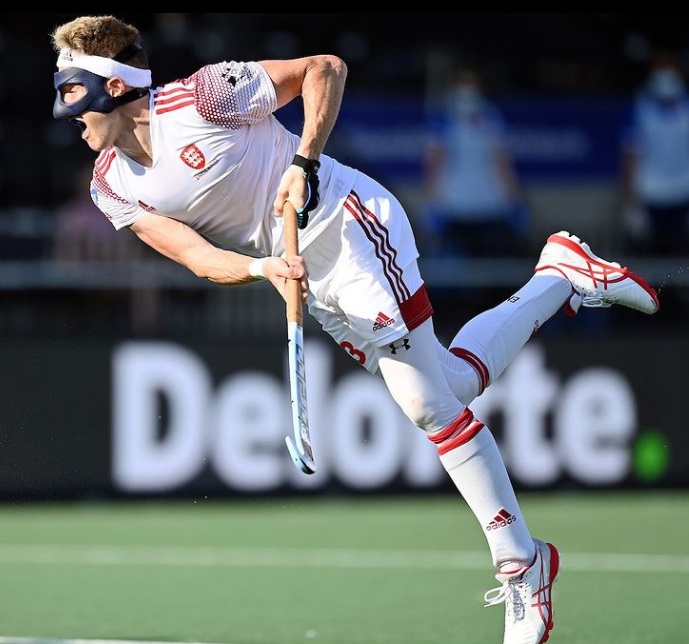 Podium Analytics has continued to make inroads into highlighting injury in youth sport by signing up England hockey star Sam Ward as an athlete ambassador.

Ward, a Hockey Paper columnist, will help charity Podium Analytics in designing solutions for young people to create a safer world of sport for the next generation of players.

Ward, who joins Alex Danson-Bennett as an ambassador, has experienced a number of injuries, including a career-threatening incident during an Olympic qualifier against Malaysia in 2019 in which a hockey ball shattered his eye socket and led to impaired vision in his left eye.

Following a lengthy recovery process, Ward returned to training in 2020 and secured a place in the GB Olympic hockey squad. He now wears a specially-designed face mask when he plays hockey to protect his eye and the upper portion of his face post-injury.

He said: “I’m lucky that my injury happened on an international stage. I feel incredibly fortunate to have received such excellent medical and psychological support over the past years to deal with the impact of the injury and the challenges of recovery.

“Without all that, I don’t think I’d have come back to the sport at the level I’m playing now. Ensuring focus of this kind and minimising injury, and the impact of injury, at a youth level is really needed. That’s why I am a huge advocate of Podium’s work and am excited to work with the team to keep more kids in sport for longer.”

Former F1 team boss Ron Dennis launched the foundation last September, partnering with England Hockey and other major sports with a multi-million pound investment over the next decade.

Andy Hunt, CEO of Podium Analytics, added of signing Ward: “We have been deeply impressed by Sam’s comeback after Malaysia, and he’s done it again post-Tokyo.

“We look forward to learning from Sam’s experience to design solutions for young people, and I am certain that the drive, resilience and personality that Sam brings to the GB and England team will help us to create a safer world of sport for the next generation of players – at all levels.”

Read our safety in hockey coverage