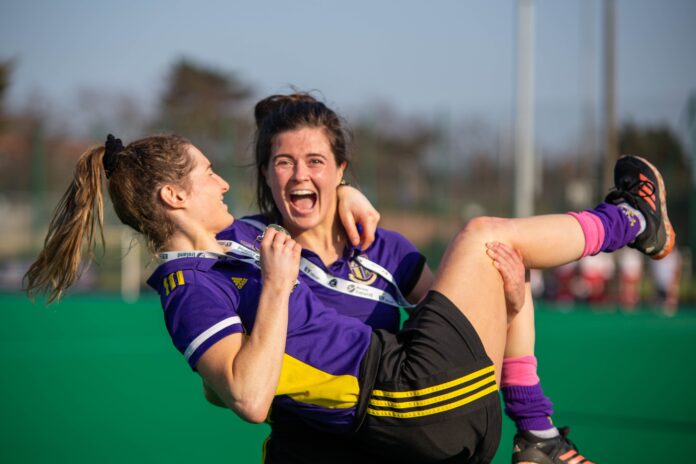 Aisling Naughton’s spectacular second minute goal was enough to get Pembroke the 1-0 win against Muckross they needed win the women’s EY Hockey League for the first time.

Earlier in the day, Catholic Institute beat Belfast Harlequins 2-1 at Deramore Park to take the league down to the last fixture to determine the destination of the title.

It meant Pembroke had to get a victory against a side fighting for their lives to try and escape relegation. And the Serpentine Avenue hosts got off to a dream start when Naughton dove full length at the left post to turn in Ellen Curran’s excellent ball.

From there, Pembroke dominated the play in the first half but a tough of over-eagerness meant an insurance goal proved elusive with Rachel O’Brien hitting the post and a number of other chances bouncing across the face of goal.

That ratcheted up the tension in the second half as any Muckross break-out had the potential to scupper the celebrations and, with lots on the line, the green and whites found some rhythm.

But Pembroke finished strong, controlling the final quarter as Aoife Glennon – an immense talent between the posts – kept out a range of shots from different angles.

“It’s just phenomenal to be able to finish it off like this, at home, in front of our crowd; absolutely buzzing,” Naughton said afterwards with the club landing the title for the first time having never breached the top four before in the EYHL.

“It is quite momentous. When a few of us joined a few years ago, we had a goal to bring the club to this level and we have a built a squad of not just 18; there’s 26 or so. And this is testament to that because we only played two matches at full fitness.

“We were delighted to get that early goal; we had plenty of chances and Muckross made it really difficult for ourselves. But we did have too many chances and we really do need to make sure of it if we are here again! But one’s enough!”