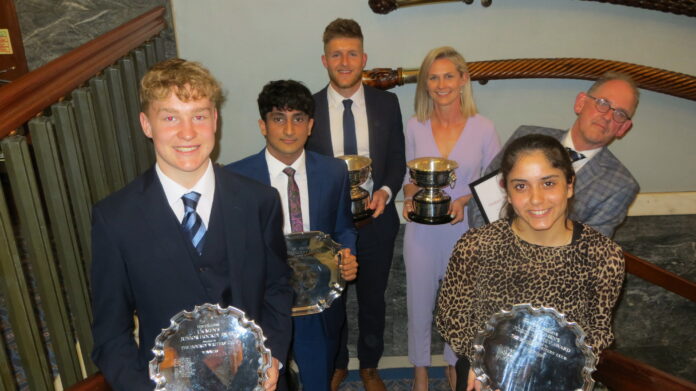 Four new rising talents of the game were announced as winners of the Hockey Writers’ Club youth and junior awards for 2021 at the annual awards lunch in London on Friday.

The four inductees of the prestigious awards joined the likes of Olympic champions Maddie Hinch and Sophie Bray as past winners.

The judging panel sought information from coaches and regions to assess the four winners. This year’s awards are the first to be held since 2020 following the pandemic.

Junior, Girls 16 and under – Sofia Martin

Sofia was on Tottenham Hotspur women’s books from aged nine until last year when she left their WSL academy. She has since been signed by Watford FC women’s reserves team, where she currently keeps up her fitness. However, faced with an increasing schedule, she has chosen hockey over football following her England breakthroughs.

Sofia first started training with Southgate HC as a junior and has won honours with Middlesex county, before being selected for England under-16s as a 14-year-old. The midfielder had national under-18 trials and is currently playing beyond her age group after being selected for England women at the upcoming FIH Junior World Cup in South Africa. Sofia has impressed her club due to her commitment towards coaching the minis section at Southgate. Her main ambition is to play in an Olympic Games with GB Hockey.

John Bell, England’s under-18 head coach, said: “Sofia is a player with many already elite-level attributes. Her talent on the field is clear for all to see, but the focus and effort, the resilience and adaptability that she exhibits equally on and off the pitch, will be crucial factors in supporting her desire to represent at the highest possible level.”

Junior, Boys 16 and under – Harry Stone

Harry started out playing hockey at Warwick HC as a nine-year-old. He played Warwickshire county and was picked for the under-14 UK Lions squad at 12. In 2019, he was player of the tournament for Pennine Pumas at the Futures Cup. A year later, he debuted for England under-16s against Ireland, also winning the under-16 club championship with Repton. The centre mid has captained England under-16s and, more recently, with England under-18s, having also been picked for an upcoming  5 Nations tournament. At club level, he gets involved with Repton minis on Sundays, while at senior level he made his Super 6s Premier Division indoor debut with Repton.

James Culnane, England under-16 boys’ coach said: “Harry has been a force of nature on and off the pitch. His leadership and drive helped guide the England U16s through a pandemic and his performances galvanized them through their international summer. A talented midfielder with the ability to break lines through pace and skill.”

Youth, Boys 18 and under – Yuvraj Bhuhi

A young Yuvraj used to play basketball and initially started playing as a football goalkeeper. His hockey coach father, Harvinder, said that Yuvraj was “always getting nosebleeds in goal” due to his dedication to fight for the ball! He was invited to Leicester City’s football academy as an under-10, but he switched fully to hockey aged 14 as part of a successful Leicester HC side. He soon moved to Barford Tigers and has been playing in the National League since he was 15. The Tigers are on the cusp of promotion to Division 1.

Last September, Yuvraj made his England under-21 debut against Malaysia at Lee Valley, and he now hopes to attend Loughborough University in September to study bioengineering. He also helps to coach alongside his father in the Leicester region, while Yuvraj’s older brother, Rohan, is a current EDP player.

Yuvraj has been described by his England under-18 coach Mark Bateman as having “excellent levels of performance” and has coped well with the transitioning between the two age groups, at under-18 and EDP level, showing solid commitment to the programmes.

Youth, Girls 18 and under – Maddie Axford

Maddie played a variety of sports throughout her school career, while her skills have been evident this season after scoring in her first 14 games for University of Nottingham in Division 1 North. The team is now setting its sights on Women’s Premier Division hockey for the first time.

A former Bedford Girls’ School student, she played junior hockey at Southgate HC, winning the under-18 club finals, while she played at Cambridge City under coach Helen Richardson-Walsh for two seasons before moving to Nottingham.

Hailing from a hockey-mad family, Maddie’s sister Kate is in the England/GB senior squad – she also won the Hockey Writers’ award in 2016 – and brother Charlie is also on the Elite Development Programme. The forward has now been picked in the England women’s squad for the FIH Junior World Cup.

Simon Letchford, England’s under-21 head coach, said: “As an under 18, establishing herself in the Great Britain Elite Development Programme, gaining selection for an U21 Junior World Cup and scoring freely in the English Hockey League all suggest that Maddie has a bright future. Possessing great skill, pace, directness and immense goal scoring capability, Maddies’ attributes make her a valuable asset in any side.”