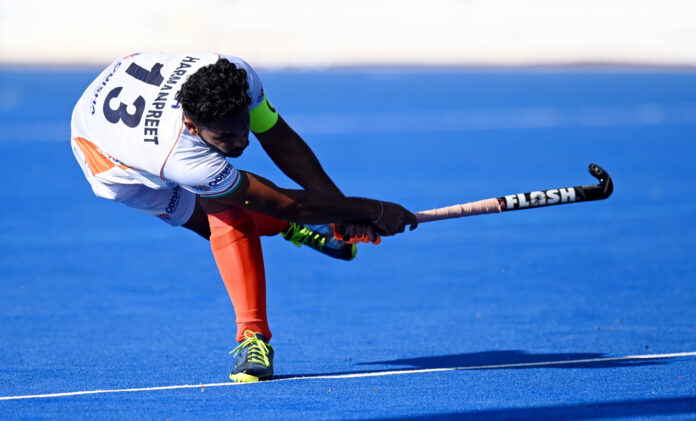 Star defender and drag flicker Harmanpreet Singh has been a central figure in the resurgence of the Indian men’s hockey team in recent years.

His clutch performances for the team not only played a vital role in the Indian Men’s team’s Olympic bronze success in the 2020 Tokyo Olympics, but also saw the 26-year-old earn the title of FIH Men’s Player of the Year 2021.

In his guest appearance on Hockey India podcast Hockey Te Charcha, Harmanpreet reflected on India’s success in the Tokyo Olympics and opened up about the various facets of his individual game.

Speaking about the context that inspired India’s long awaited Olympic Bronze Medal triumph in the Tokyo Games, Harmanpreet said: “Our team spent a lot of time together in lockdown last year before the Olympics. It was a difficult situation because we were not able to visit home in the initial months of lockdown, but facing that period of difficulty together prepared us for the challenges of the Olympics last year.

“Even after trailing 3 – 1 against a team like Germany in the Bronze medal match, it was our collective mindset in difficult situations which got us over the line eventually.”

Harmanpreet has steadily grown in stature in the team’s ranks since making his national team debut in 2015 – and now vice captain of the side. “I really enjoy this additional responsibility,” he said. “It has never felt like an added pressure because everyone in the team is able to communicate openly with each other. Of course, Manpreet and other senior players like Sree bhai (PR Sreejesh) also take responsibility to guide the team in training and match situations, so it is a collective effort on the part of the whole team to grow together.”

Another aspect of the game that Harmanpreet has mastered is his goal scoring from penalty corners. One of the most feared drag flickers in the world today, the Punjab based defender spoke about how he acquired this skill.

“I was training in Ludhiana at the time when my Coaches identified me as a potential drag flicker, but it was in the Surjit Hockey Academy in Jalandhar that I received proper training for the first time ever in taking penalty corners.

“I used to spend a lot of time individually before and after team practice hours to improve my drag flicks, and also had the right kind of guidance from senior players in the academy. Then after I came into the national team, I saw players like Sardara Singh and Rupinder Pal Singh work on their game. Learning from them helped me improve my skills even further,” Harmanpreet reflected.