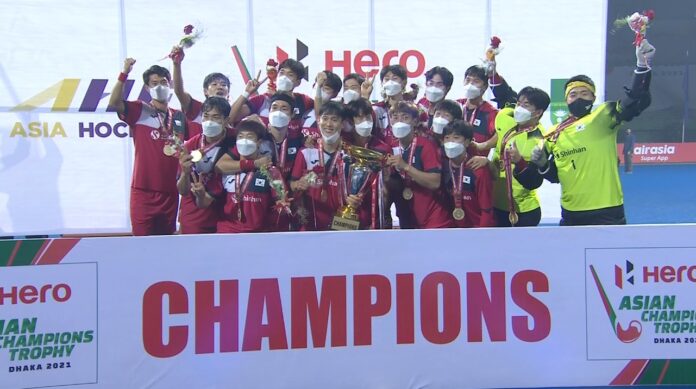 South Korea won the Men’s Asian Champions Trophy but it was Ryoma Ooka who left the hockey world in a spin after scoring a superb double 360-degree shoot-out goal.

South Korea their first title at the tournament in Dhaka after clawing their way back from 3-1 down in normal time to take the game to a shoot-out and sealing the title.

Korea opened the scoring through Jeong Jun-woo, but goals from Ken Nagayoshi, Ooka and Yoshika Kirishita handed the initiative to the Japanese. A late double by Jang Jong-hyun took the match to the dramatic finale.

Captain Lee Jung-jun, Ji Woo-cheon and Hwang Tae-il all netted in the shoot-out before Lee Hye-seung scored the winner.

Ooka had taken the ball towards the Korean ‘keeper before undertaking a double spin, then shooting low into the net at the last second. The video later went viral.

Former India captain Viren Rasquinha said: “The skills that players have these days!

“No coach will teach these skills. Just hours and hours of practice along with the immense guts (huge probability of going wrong and looking like an idiot) to actually execute it in the final of a tournament.”