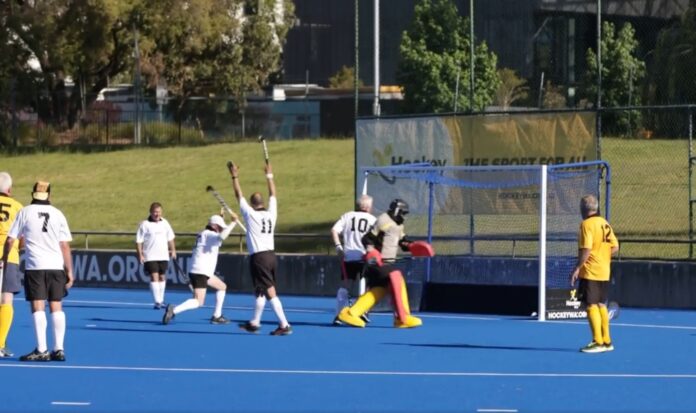 The Access Cardiology Western Hockey Masters Gala Day at Perth Hockey Stadium at Curtin University saw some of WA’s most legendary Masters figures hit the field in style in support of the wonders of modern medicine.

Now in its sixth year, the record in the Bionic Cup stands at three all after the Knees defeated the Hips 2-1 in this year’s spectacle. The Hearts claimed the inaugural Survivors Cup, with another 2-1 score line in their favour against Team Cancer.

Team Knees Captain David Lockett said, although his side missed some chances his side’s years of experience with one another enabled them to be more controlled across the board. “I think we had a bit more dominance over them this year and we were a little bit more controlled around the back and the midfield,” Lockett said.

Hearts Captain Heath Tyrell thought that his side performed well under the circumstances on the day. “We had 14 players today who hadn’t really played together before this match,” Tyrell said.

“We started off really scratchy and went one-nil down, but we managed to gel together and bring it back to two-one in our favour, so a really good effort from the Hearts team today.”

Both Captains and their sides were competitive on the field but shared the same sentiment that it’s great to be able to continue to play the sport they love, regardless of age or ability. Lockett said: “I’ve been playing for 57 years but anytime you can go out there at this age and play hockey with your mates is an absolute bonus,”

Tyrell shared his thoughts, stating that hockey is a sport for life with people of all ages competing regularly against one another.

“We encourage people of all abilities and ages to come and play because hockey’s a social game more than anything,” Tyrell said.  “We have people up to 80-years-old now playing international matches at masters tournaments; hockey really is a sport for life unlike other sports.”

Alongside the two key fixtures were Masters All-Star Games, with hopes to further add to the spectacle in the years to come.